Following the outbreak of the novel coronavirus in Wuhan in January, and its subsequent spread throughout China and now the world, many Chinese citizens have gone online to express their frustration with the government’s cover-up, obfuscation, and mismanagement of the public health crisis. In an effort to control the spread of the virus, which has now slowed down in China after infecting more than 80,000 people and killing more than 3,000, authorities have used sometimes coercive and violent tactics to force residents to abide by quarantines and other orders. Some have compared those brutally enforcing the rules to the Red Guards of the Cultural Revolution era. Christian Shepherd and Yuan Yang report for the Financial Times:

In big cities such as Beijing and Shanghai, these are usually lax. But in some regions, especially those nearer the outbreak’s centre in Hubei province, local officials have quickly established their own fiefdoms, barring outsiders, confining those considered an infection risk and publicly shaming anyone who does not follow their instructions.

In other cases caught on video in recent weeks, people have been welded into their homes for “quarantine” or tied to lampposts for not wearing a face mask.

[…] Beijing has made efforts to temper the enforcers, with one leading public security official warning against over-the-top and “simplistic” measures that “damaged the image” of the regime. But such statements have little effect on the ground. [Source]

The following order, which has been shared online, was reportedly issued by the Nanyang (Henan) Novel Coronavirus Pneumonia Epidemic Prevention and Control Office in an effort to ban video and images of law enforcement actions:

Nanyang Prevention and Control Office (2020) No.82

Recently, we have seen a large amount of online public opinion [which includes video recordings] regarding conflicts between this city’s law enforcement officers and those that they are managing. It is understood that some of the videos were recorded by on-duty law enforcement officers, for educational and deterrent purposes. But some of the videos were taken out of context after being transmitted online, drawing public attention and causing adverse social impact.

It is necessary to record law enforcement processes in our line of work as a form of record keeping, but uploading these records to WeChat groups and friend circles will not only cause information leakages but also lead to viral posts and malicious speculations online. In order to protect the big picture of overall public opinion and maintain the city’s image, all epidemic prevention and control staff in the city are specifically requested to enhance public opinion risk awareness, and refrain from uploading any video and image recordings on the internet at will. If this rule is violated, causing adverse consequences, the Municipal Epidemic Prevention and Control Headquarters will hold the matter to account.
March 4, 2020 [Chinese] 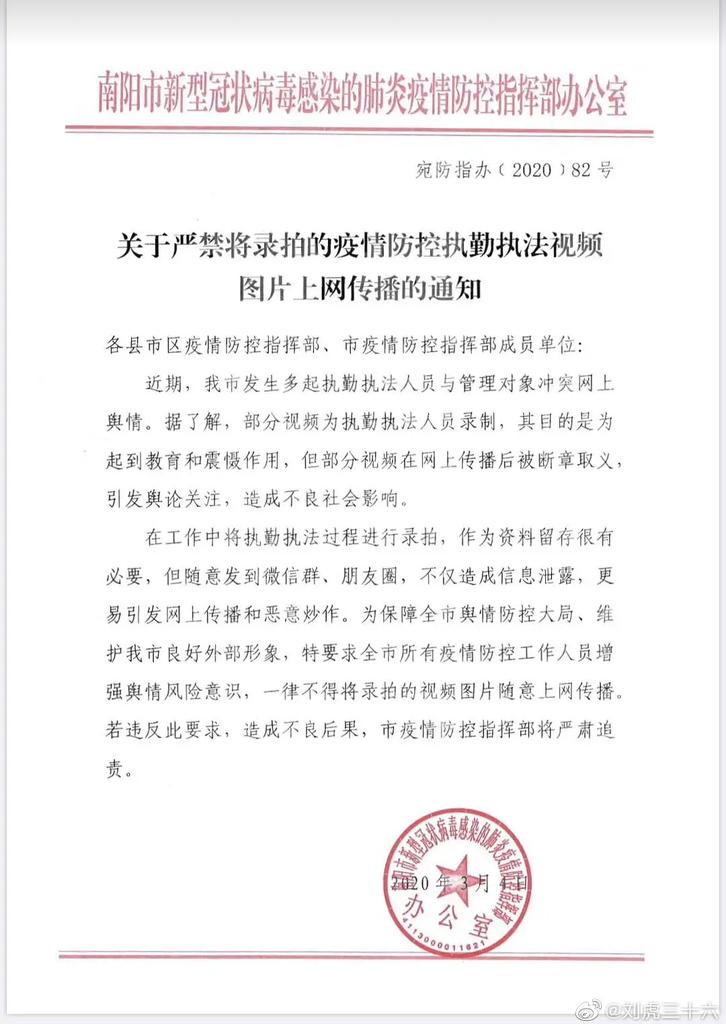