CDT Chinese last week reported on a notice issued by a rest home for retired officials that has been circulating online. Dated May 10, the notice asked “we will take all possible preventative measures to reject and return legal documents related to these frivolous lawsuits originating from the United States.” 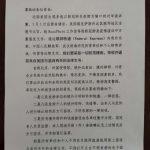 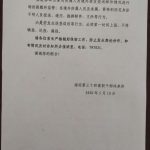 There have recently been a surge of American lawsuits against China based on the pretext of the novel coronavirus epidemic situation. On May 1, a U.S. District Court of the Northern District of Texas officially issued related legal documents, pertaining to BuzzPhoto Studio and other plaintiffs, and via Federal Express mailed relevant legal documents such as complaints and subpoenas to our Ministry of Foreign Affairs, the People’s Liberation Army, the Wuhan Virus Research Institute, as well as to other work units and individuals. We will take all possible preventative measures to reject and return legal documents related to these frivolous lawsuits from the United States.

China’s capital, Beijing, is in a complicated situation with many unknowns, due to its concentration of foreign embassies and consulates, foreign correspondent press posts, foreign lawyers, and other foreign enterprises and institutions. We will raise high our comprehensive political awareness, remain highly vigilant, and adopt and resolutely implement strong measures. Related requests are as follows:

Please keep this information strictly confidential to prevent any public speculation. If any issues arise please inform your work unit at ****.

Thank you for your cooperation!

On April 30, the Guangming Daily published the article “Law and Reason In Response to Excessive U.S. Complaints,” which outlined a similar strategy:

Since the U.S. declaration of emergency due to the novel coronavirus epidemic, accusations against China have been constant. Individual members of Congress have suggested publicly and on television that the Trump administration “force China to forgive a large portion of U.S. debt in demand of payment for the cost the coronavirus had on the United States.” A number of U.S. companies and individuals in the states of Florida, Texas, Nevada, and California have also filed numerous “class action lawsuits”  against China in district federal courts. On April 21, the state of Missouri filed a lawsuit in federal court, falsely accusing [China] of deliberately concealing the novel coronavirus epidemic situation and allowing it to spread into a worldwide pandemic, and demanding compensation from China. This is the second U.S. state planning to sue China. [Chinese]

The article lists “our country’s legal and rational method for these lawsuits,” including a “lack of minimum contact” and the “inappropriate process of serving lawsuit documents to China“:

When these excessive complaints get official American government support, or after the court formally initiates proceedings, it will be possible to hold stern diplomatic negotiations with the U.S. Department of State, if necessary on grounds of immunity from prosecution, lack of minimum contact, communication, inconvenient forum, the submission of amicus curiae from academic organizations, or copying legal notes and memoranda explaining on what grounds we enjoy state immunity. According to incomplete statistics, over the past 20 years U.S. courts have more than ten times been found without jurisdiction in private lawsuits filed against the Chinese and/or local governments, on grounds that they do not qualify for the foreign sovereign commercial activity exception, the subject of the lawsuit is a non-commercial activity, the commercial activity has no direct influence on the United States, the statute of limitations has expired, the lawsuit was not properly served in China, the plaintiff has unsuccessfully asserted that an illegal act occurred within the borders of the U.S., the plaintiff does not meet qualifications, etc. [Chinese]

The article also recommends, in the case that a U.S. court imposes jurisdiction and passes an unfavorable judgement, China can claim immunity:

In the long term, to legally guard against similar situations in the future, our country can consider ratifying the United Nations Convention on Jurisdictional Immunities of States and Their Property and introducing the “State Immunity Law.” Since the U.N. Convention recognizes institutions of limited immunity, our country signed in 2005 but hasn’t yet ratified it. The Convention, which has now been signed by 28 states and ratified by 22 states, has not yet gone into effect, and will not until 30 days after the date of the 30th ratification or accession is deposited with the Secretary-General of the United Nations. Nevertheless, we can still take advantage of the ratification of the Convention to expedite domestic legislation, and specify some exceptions to immunity, such as limits of immunity against foreign countries that acquire our property in violation of international law, so that Chinese enterprises and citizens have the opportunity to exercise their right of appeal in Chinese courts, and provide legal grounds for China to take countermeasures. [Chinese]