CDT has recently acquired and verified a collection of propaganda directives issued by central Party authorities to state media at the beginning of this year. These directives were issued on an almost daily basis in early 2020, and we will be posting them over the coming weeks. The following five directives were released on March 4, 2020.

Please refer to this specimen, “Don’t get distracted! Sun Yang again posts evidence, but web users see through it, asking: do you think we don’t know the rules?” and find and delete similar content from news segments of mobile and desktop apps, especially self-media accounts. Please submit feedback on the clean-up situation by 10:30; if no reports are found, please report “none.” (March 4, 2020) [Chinese]

On February 28, three-time Chinese Olympic swimming champion Sun Yang was suspended from competing for eight years for a drug testing violation, virtually ending his career. An article with the title above has since been deleted from Baidu archives. An earlier directive on February 28 restricted coverage of his case and called on media to, “Strictly manage all kinds of attacking or defamatory commentary.” 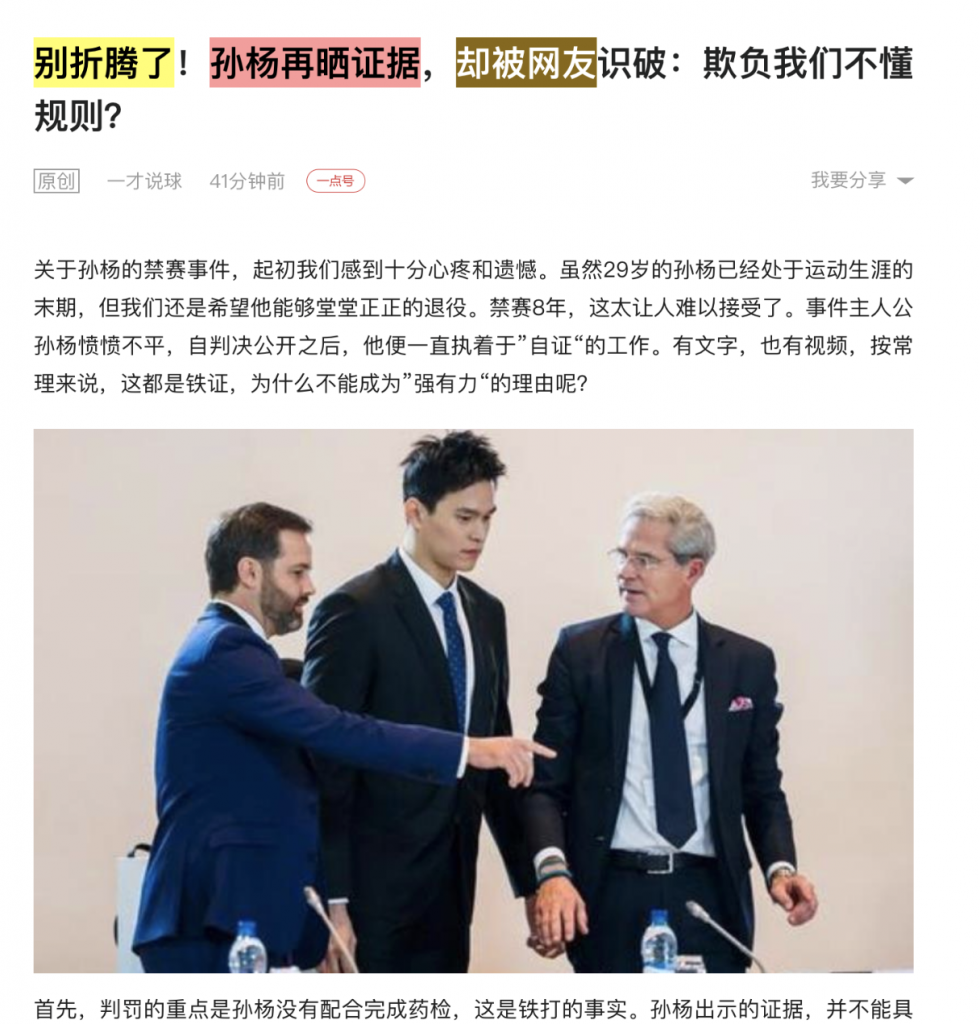 If reporting on the comprehensive inquiries made by the Central Political and Legal Committee-led investigation team into the outbreak incident at Shandong’s Rencheng Prison, their conclusion, the handling of the people found responsible, or other such situations, do so in precise accordance with authoritative information from the Central Political and Legal Committee, Ministry of Justice, and Shandong provincial authorities. Do not embellish or hype. Any commentaries published must support the law-based investigation and handling. Do not produce misleading or provocative headlines. (March 4, 2020) [Chinese]

In February, coronavirus outbreaks at several prisons led to official investigations. At Rencheng Prison in Jilin, 207 people were infected, including seven guards, by late February. Previous directives also called on media to “not carry out independent newsgathering, reporting, or commentary” on prison outbreaks. A directive on March 2 limited reporting on a prisoner who had caught COVID while in detention and then traveled to Beijing upon her release, despite strict travel restrictions.

Everyone, especially news colleagues at @NewsCommunity, please claim a set of pages to inspect for old images and text involving Aqiu [Qin Menghuang] and look to see whether any need deleting. (March 4, 2020) [Chinese]

Qin Menghuang (aka Aqiu) is a CCTV host who caused an online furor in late February when he suggested on Weibo that China should apologize to the rest of the world for the coronavirus outbreak. He further stoked the anger of nationalist internet users by referencing the phrase “Sick Man of Asia,” which had earlier been used in a headline in the Wall Street Journal, leading the Chinese government to expel three of the paper’s journalists. The phrase is seen as an epithet by many as it references weak governance and is associated with the “Century of Humiliation” prior to the Communist era.

If reporting on compatriots being kept in isolation overseas, do so in accordance with information published by authoritative departments, or promptly verify with the Ministry of Foreign Affairs or our embassies or consulates abroad. Do not cite foreign media reports or information circulating online. (March 4, 2020) [Chinese]

International travel during the coronavirus outbreak was an especially sensitive topic, with several previous directives limiting reporting on other countries’ travels bans on Chinese citizens, and travel into China from neighboring countries.