From Reuters via the New York Times: 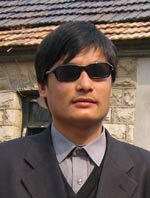 A blind Chinese human rights activist whose jailing last month sparked an international outcry has filed an appeal, asserting authorities stifled his defense and apparently coerced witnesses into testifying against him.

“This trial was clearly an unlawful one in flagrant violation of the basic principles of criminal legal procedure,” the appeal states. The appellant has reason to believe that the so-called confessions provided by the prosecution were the product of coercion.” [Full Text]