This oil painting, named “Nanjing massacre“, consists of three parts–“slaughter”, “rebirth” and “Buddha”. The main part of the painting is the mountain of bodies. The left part, “slaughter,” shows two Japanese military officers standing with a smile and one of them rubbing blood off the sword. The middle part, “rebirth,” shows a child crying on his dead mother’s chest. The right part, “Buddha,” displays a Buddhist carring a dead old man. Behind the corpes is the running Yangtze River. 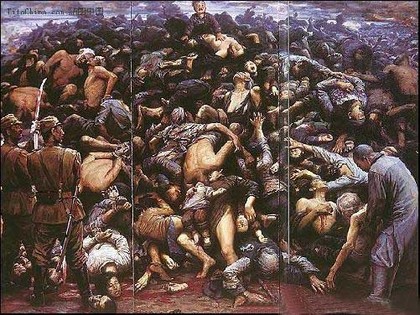 Minitrue: “I Can Massacre the City, You Can’t Say a Word”

Photo Essay: An Entire Day on the Beijing Subway