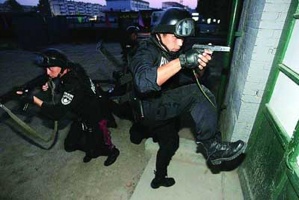 From The China Daily, via Zhejiang Online:

A special police cavalry task force has been established in Guangzhou’s Baiyun District to tackle street crime in the southern metropolis in the following months.

The police cavalry task force, consisting of more than 100 armed police, has been equipped with advanced police motorcycles and cars.

Defensively, they will have bullet-proof vests, steel helmets and explosion-proof clothes. They will also be given batons, pistols, and machine guns and other advanced weapons.

Commissioned last week, the force will patrol the city’s commercial streets, shopping centres, large housing estates and other busy areas where the crime rate is usually high in this provincial capital city, according to a police officer from the Baiyun District Branch of Guangzhou Municipal Bureau of Public Security yesterday. [Full Text]