When Will the Party End? – David Fullbrook 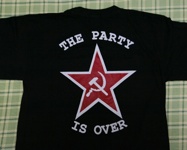 In 1976, Mao Zedong died, leaving China destitute. Shopping was a dreary chore, more space than stock filled shelves. Choice was almost unheard of because there was no competition, just control and command.

Today, however, China’s supermarkets brim, the choices as dizzying as any in Europe or Japan. A big dash of capitalism then has brought the freedom to choose. And today, as China’s Communist Party seeks to hold onto power while opening its markets, the party seemingly has picked the worst of both capitalism and communism.

Mao sought to solve the problem of inequality by giving everyone the same wealth – very little, in a word – and status while giving some of the few more political or legal rights depending on where they stood in the party and bureaucracy. Little has changed when it comes to political and legal rights. The party is not for sharing power and baulks at putting itself under the law. Jeopardy is being doubled by corruption and obstinate bureaucrats trying to protect their petty kingdoms of power. [Full Text]