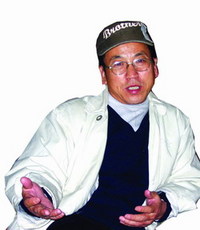 Google the name of journalist Gao Qinrong in English today and the top results show a smattering of reports from overseas rights groups and a few news outlets – some noting his early release from prison in Shanxi province earlier this month (see AFP), but most predating it. Now Google Gao in Chinese (È´òÂã§Ëç£) . Reams of fresh material pop up, making Gao a cause celebre for advocates of greater media supervision and free expression in China. Southern Weekend and Southern Metropolis Daily published one-on-one interviews with Gao on Thursday, and news portals like Sohu have packaged those together with online commentaries and snapshots of similar cases. This from the Gudengtubi blogger‘s piece on Jiangsu Online, which was picked up widely :

“Why must a reporter, just for speaking a bit of truth, pay the price of freedom, reputation, family, and even life? Gao Qinrong’s miserable fate is an open threat to all citizens who attempt to speak and express the truth. And to the oft-amended text of our constitution, that declaration of the rights of citizens that so dazzles the eyes, it’s also the greatest show of contempt and mockery.”

Gao Qinrong was the journalist in Xinhua’s Shanxi province bureau who in 1998 blew the whistle on a bogus $25 million irrigation scheme in the bone-dry city of Yuncheng. Xinhua buried his report, but it ended up appearing in the internal reference edition of the People’s Daily. Southern Weekend, CCTV and others followed up with exposes based on Gao’s report. Later that year, however, local officials slapped Gao with 12 years in jail on sketchy charges of embezzlement, bribery and “pimping” – a naked vendetta, Gao’s supporters alleged. Within a few years, their ranks swelled to include newspapers reporting the sad story of the imprisoned journalist and delegates to the NPC and CPPCC taking up his appeal. http://www.zonaeuropa.com/20061217_1.htm

The scale and tenor of the coverage Gao has gotten since being sprung is not common. But then again, neither was the publicity his case attracted here over the years. We polled a few friends in the Chinese media about the reaction. “It’s not unexpected,” commented one editor with a news portal in Beijing. “During this affair there was always a voice among the people.” Still, another Chinese journalist in the capital said: “The fact that they called him ‘framed’ throughout the story is really heartening. Everybody knows he was framed but nobody in higher government stood up for him Read that story with tears in my eyes. Ain’t kidding.”

Gao’s still battling to clear his name. We’ll see how much more mileage the press can get of it.
To read Gao’s moving interview with Southern Metropolis chief reporter Jiang Yingshuang, click here. An English translation by ESWN is available here. Translated excerpts of the other interview with Southern Weekend follow….
—————————
Reporter: Can you describe the situation when you got out of prison?

Gao Qinrong: The deputy warden told me that the court ruling had come down and asked, ‘will you leave now or should we’d quietly send you off tomorrow morning. I said I’d leave now.

Reporter: What was your mood at the time?

Gao Qinrong : Happiness, heaviness, grief and indignation. Happy that I would be seeing my wife and daughter right away; heavy because National People’s Congress delegates, CPPCC national committee members, and a lot of media have cried foul on my behalf, but up until now there was no result; grief and indignation because the case of [Gao’s business associate] Gao Manqiang’s beating [on being released in 2003] has not been solved to this day.

Reporter: Gao Manqiang was in the same prison as you?

Gao Qinrong: Same prison. Right after he got out he was brutally beaten. He was unconscious for 48 days. Some prison buddies who got out a few years ago told me that when I got out I absolutely had to tell them. Some still say that they’re going to prepare a helmet and a bulletproof vest for me. Out of fear that the Gao Manqiang incident would happen again, the prison sent for a car to me send me off.

Reporter: When you exited the gates of the prison, what did you feel?

Gao Qinrong: A big a sigh of relief.

Reporter: After being released, what was the first thing you did?

Gao Qinrong: I called my wife and told her I was out.

Reporter: What was your wife’s response?

Reporter: On the way home, what were you thinking?

Gao Qinrong: I was looking at the outside world. What used to be a surrounding wall had become a shop. When I went to the local police station in Taiyuan to take care of my transfer, I couldn’t even find the doors of the station, and I’d been to this police station several times before in the past for interviews. Later, I couldn’t even not find my home. Reporter: That night, did the whole family eat dinner together?

Gao Qinrong : No, I only saw my child two days later. When I left she was 8-year-old, now she’s 16. I embraced her and asked whether she missed her father, and she nodded and burst into tears

.Reporter : At the time you exposed the irrigation fraud in Yuncheng, what was the actual situation like?

Gao Qinrong: At the end of 1997, I was going to Yuncheng for a story, and on the train I heard about the fake irrigation project. How big of a fake? Facing the highway on this side were a number of dug-out ponds forming half an arc. The other side was empty.
Reporter: What kind of reactions were there after the report came out?

Gao Qinrong: “People’s Daily” issued the article openly on May 27, 1998. On October 16, 1998, Central Television also broadcast about the fake irrigation, and at the time I was so happy I simply cannot describe it. In December, I went back to Beijing. On the afternoon of December 4, I received a call from an acquaintance asking me to go to the Yue Xiu Hotel. When I knocked on the door there wasn’t anybody there, but at that moment the elevator door opened. Three people got off and took me away.

Reporter: Looking back on it now, what are your thoughts?

Gao Qinrong: I can answer you this way, and it’s the way I’ve always thought. I think that as a reporter, one has to appeal on behalf of the people. If hadn’t had not written this article to start, perhaps this wouldn’t have happened. But if everyone was a yes-man, would there be any hope for this country? Therefore, corruption must be exposed. Of course, the risks of exposing it like this are so great. Without a system, media supervision can only be empty talk, and will forever be fragile.

Reporter: Have you ever had regrets?

Gao Qinrong : I truly have no regrets, but there was no other way. This is fate. To try escape it is impossible. But after these eight years, luckily I’m still alive. Over the past few I’ve been writing thank-you letters, and later I will write a book about my trials. I’ve already written 50,000 words of reportage, and later I’ll turn it into a longer piece of writing. Then I want to write a film script about my life in prison. In the past I’ve also thought about being a reporting again.

Reporter: According to the regulations, staff who have done time in prison cannot serve as reporters again.

Gao Qinrong : Yes. If I’m to serve as a reporter again, I must wait to be vindicated(Âπ≥Âèç).

Reporter : Do you have any other concrete plans?

Gao Qinrong: There were a lot of people in prison for economic crimes. They gave me a number of ideas. Some friends have given me patents and want me to consider them. Among the ones where the upfront investment would be rather minimal, one could be launched for just around 10,000 yuan.

Reporter: Right now, do you find yourself feeling sort of fatigued?

Gao Qinrong: I have a firm will to press my appeal. I cannot have sat there in vain for the past eight years. What worries me now is my family’s finances. I’m a man, after all. I can’t just let my wife take care of herself. It’s a practical problem.

Reporter: In the days since your release, have you managed to adjust?

Gao Qinrong : In jail I kept on reading the papers. I also learned computer. Since getting out I felt that this society has changed so much. I first want to learn about this society. Freedom is happiness – this I have felt deeply.