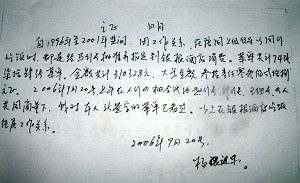 From Yulun Jiandu Wang, translated by CDT (Pictured – one of the IOU bills signed by former chief Yang Jiandong):

Over nine years, central bankers at Henan‘s Huixian City (ËæâÂéøÂ∏Ç), a county-level town, have been eating big meals at a mom-and-pop hotel but hasn’t paid a penny. The total amount of bills over all these years is over 2 million yuan, or $250,000. Locals have renamed this central bank’s branch into “Huixian’s Eating Branch (ÂêÉË°å) of the People’s Bank of China.” (“Eating” has a similar pronunciation with “zhi,” or branch.)

Mr. and Mr.s Cui Naifeng (Â¥î‰πÉ‰∏∞), laid-off workers ten years ago who contracted the hotel from the Huixian Branch in late 1996, showed the reporter over 100 bills, all signed but remaining receivables. Those between 1997 and 2000 were the meals for former branch head Ma Jinfeng (È©¨ÈáëÈîã), deputies Guan Jinbao (ÂÖ≥Èáë‰øù) and Yang Jiandong (Êù®Âª∫‰∏ú), respectively eating off 733,431 yuan, 246,527 yuan and 310,328 yuan. Those between 2002 and late 2005 were the meals for current branch head Zhao Tongzhang (ËµµÂêåÁ´†) and his deputies, eating off a total 320,000 yuan. Other bills from the bank’s employees total more than half a million yuan. That was an eating rate of over 200,000 yuan a year.[Full Text in Chinese]

Interestingly, a meeting in last September involving former and current banking officials recognized all these bills, but the receiveables have been reluctant to come in. President Zhao, the current boss, tried to avoid the payment with a variety of reasons.

After spending another 200,000 yuan on a renovation of the hotel, the husband and wife have run into a financial difficulty and finally decided to close shop.