Down With Wasteful Destruction – China Daily 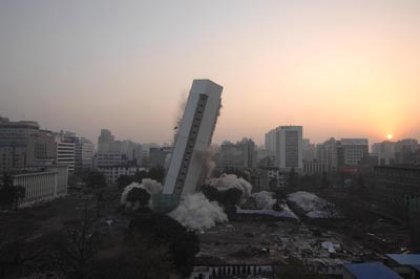 An insightful opinion piece by Liu Shinan of China Daily on a recent blast to demolish a lake-side building that some say tarnish the natural beauty of the West Lake and its environs:

The blast has drawn extensive criticism. Many critics blame the decision-makers for their “short-sightedness” in constructing the building 13 years ago. Undoubtedly, these decision-makers do deserve criticism. If they had not acted on rash impulse in the construction project, if they had given more consideration to the design of the building with regard to its surroundings, there would not be today’s regrettable (actually, dreadful) destruction.

However, the decision of today’s decision-makers is also questionable. Is it really a cogent argument that the building must go?

The tower was a teaching building of Zhejiang University. In other words, the building was constructed with public money since the university is a State-owned institution. But let us not be so quick to blame the local government for wasting taxpayers’ money, since the property was reportedly sold to a Malaysian developer for 2.46 billion yuan ($315.3 million). And let us assume that the cost of the tower was included in the deal, hence there was no loss to taxpayers. Even so, the waste is still intolerable. Money cannot buy the right to dissipate either natural resources or artificial wealth. [Full Text]