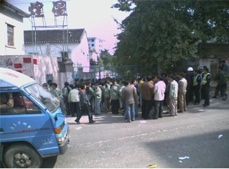 Orders canceled by Disney on sweatshop. Social responsibility upheld? Not really. From Interlocals.net:

Huangxing Light Manufacturing is an OEM factory supplying souvenirs for The Walt Disney Company in Longgang (ÈæôÂ≤ó) area, Shenzhen, China. Last year it was criticized by concern groups as a sweatshop. Yet Disney company did not work on improving its labour condition. Instead it cancelled all orders placed on Huangxing. What it did is to evade its social responsibility, force the factory to close down and leave workers’ jobless!

According to international practice, if an OEM factory is found having environmental and labour problems, company usually would continue to place order and give a one-year grace period. But Disney does not follow it this time.

According to Hong Kong newspapers, 200 workers blocked the Shenzen-Shantou Highway at about 9:00am on February 2. Tens of worker representatives went to the Shenzhen City government. But the Longgang district government sent police to maintain order and prevent workers from going to the city government. [Full Text]