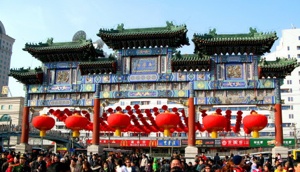 From Josie Liu’s blog (photo: a miao hui, or temple fair, during the Chinese New Year in Beijing, via the blog):

Xinhua news agency reported last week that “defending the Spring Festival has become a common view of Chinese society.” It also quoted Mr. Gao Youpeng, a scholar from Henan province, who said that more and more traditional symbols of Chinese New Year were reappearing, which “demonstrates that Chinese people are returning to traditions.”

He said he made such a call because he found that many young people who lived in the world of the Internet and video games worshiped Western culture, passionate in celebrating foreign holidays like Christmas but becoming increasingly indifferent toward their own traditional holidays, Xinhua reported. He said he felt “the safety of China’s national culture is to some degree under threat.” [Full Text]

– A Manifesto to Defend the Spring Festival (Chinese) by Gao, via Sing Tao Daily

Translation: The Fall of Commentary to Newspeak