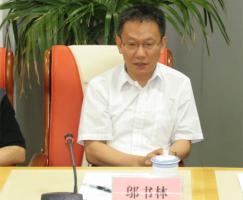 (in translation) After the seminar, reporters asked Wu Shulin (ÈÇ¨‰π¶Êûó) whether he had said “ban a book because of the person (Âõ†‰∫∫Â∫ü‰π¶)”.

At least he bothers to lie.

At a press conference in Beijing, General Adminstration of Press and Publications deputy director Yan Xiaohong was asked about the “banned books” incident. He noted that peple have been discussing this. But this time, GAPP really did not ban those eight books … When GAPP inspects books, they act in accordance with the law. Ordinarily, they would determine the contents of the book first. Following that determination, they would act in accordance with the law.”

Despite the official censorship on the Internet, for more Chinese netizens’ comments on Wu Shulin (ÈÇ¨‰π¶Êûó) and the “banned books”, read this, this and this.

The following is an excerpt of the conversation between Wu Shulin and Yuan Ying, a veteran journalist from People’s Daily and the author of The Other Stories of History: My Days at the Supplement Division of the People’s Daily (È£é‰∫ë‰æßËÆ∞: ÊàëÂú®‰∫∫Ê∞ëÊó•Êä•ÂâØÂàäÁöÑÂ≤ÅÊúà), one of the eight books banned by Wu Shulin. Because of Yuan Ying’s senior status in the party, after he wrote a letter to Wu Shulin protesting the banning of his book, Wu Shulin paid a private visit to Yuan Ying to explain the situation. Yuan Ying published his conversation with Mr. Wu Shulin (ÈÇ¨‰π¶Êûó) about this matter online here. Blogger ESWN translated this text into English at here.

Wu: This matter brought a lot of trouble to you, Mr. Yuan. But we have to do this, please forgive us.

Yuan: You mentioned eight books at one time. It’s not merely my issue now. The ban has triggered a very bad reaction among readers and the authors. I have seen the online criticism that my friends passed to me. People are criticizing this kind of illegal book banning. Some said: Secretary General Hu Jintao has repeatedly stressed democracy and rule of law, and the building of a harmonious society, and Premier Wen Jiabao encouraged writers and artists to speak the truth at a recent meeting of artist representatives, but you just did this (book banning). Aren’t you going against them? It’s obvious that the bad influence has already been felt. I believe you should adopt a quick remedy to save the situation. I recommend you to publicize the official document, or host a news conference, or post the document online so that everybody can read it.

Wu: I do think so. I have reported to the Information Office of the State Council a few days ago. I also reported to the Department of Propaganda. I asked for a measure to reveal the truth. There are so many discussions online. We should explain the truth to the public. I also said if it’s necessary I will explain myself. And I am ready to do it. Just joking, as Buddha said “Who except me is willing to go through the ultimate suffering (Êàë‰∏çÂÖ•Âú∞Áã±Ë∞ÅÂÖ•Âú∞Áã±)”. It has been several days since I submitted the report, but there is still no reply. I am very worried too.

Finally, vetaran Chinese journalist Lu Yuegang (Âç¢Ë∑ÉÂàö) wrote a long essay about this event (via boxun.com) and concluded with the following paragragh:

Wu Shulin did a dirty job. And a few days ago, he rushed to deny it. …… The three characters “Zhang Yihe” (Á´†ËØíÂíå) haven’t really been banned; the three characters “Wu Shulin (ÈÇ¨‰π¶Êûó)” have been written into history and inscribed on stone as a symbol of the system. In the eyes of the public, his denial is meaningless. According to what we know, Wu Shulin’s dirty job is much more than banning those eight books. Now, people will ask, how many more “Wu Shulins” will be written into history and inscribed in stone?

Fear and Self-censorship at the Hong Kong Book Fair

Protests in HK Amid Tensions Over Detained Booksellers

Novelists Throw Spotlight on China’s Past and Present

No Room for ‘Western Values’ in University Education