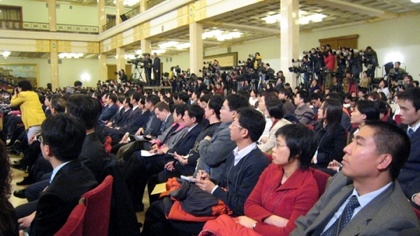 From The China Blog – TIME:

I forgot to post this from the just-finished National People’s Congress, or rather from Premier Wen Jiabao’s Press Conference afterwards. A pretty impressive turn out, I thought, though the guy next to me said he was there reporting for the Inner Mongolian Yurt Builders Weekly…or was it the Hothot Times?

Anyway, it struck me strongly that the question Wen spent the most time on was about democratic reform, a follow up on an article he wrote in the People’s Daily in February in which he appeared to suggest that it would be a century before China was ready for democracy. [Full Text]

Sensitive: Master of the Starry Skies and More