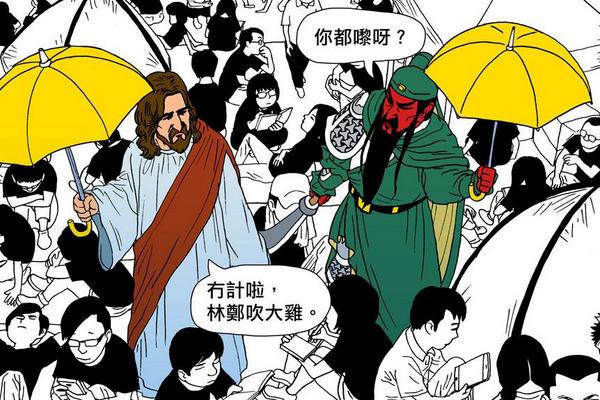 As the protest movement in Hong Kong grinds on, police this week dismantled bamboo barricades and allegedly brutalized at least one protestor. Chinese poet Meng Lang posted pictures of handmade signs that dot the crowds in Hong Kong. See the signs, translated by CDT, here.

Netizens following protest developments produced poignant cartoons in an array of artistic styles. A woodblock print shows protestors huddled beneath an umbrella. In one drawing, Jesus and Guan Yu surface in the crowd.

Mao Zedong Thought proves inspirational to Xi Jinping, who this week called on artists and writers to use their vocations to promote party ideology and deliver work that serves the people.

Before Kim Jong Un’s reappearance, the cause of his absence invited wild speculation. Chinese media outlets, however, were barred from volunteering their own conjectures.

The Leader of the Week is of course Kim Jong Un, or Kim Fatty III, Chinese netizens’ moniker for the corpulent leader of the neighboring hermitic state.

Unsanctioned stories about current and former high-ranking officials are typically targeted for censorship. Such was the case when several news outlets reported on Wen Jiabao’s visit to his former high school in Tianjin.

Among the words blocked on Weibo this week, the name of a scholar and reformer living in Beijing and detained this week on suspicion of “picking quarrels and provoking troubles.”