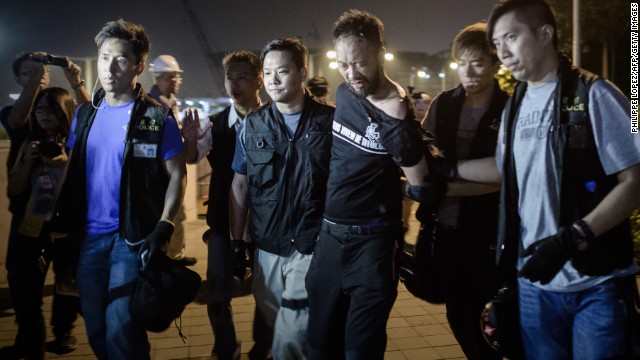 The conflict appeared to last less than half an hour, and the two sides settled into an uneasy standoff nearing dawn. But the crackdown, which the police said had included the arrests of 45 protesters, further escalated tensions in this Asian financial center as the authorities showed growing impatience with demonstrations that have choked traffic for more than two weeks.

The swift police action to reopen the road near the offices of Hong Kong’s leader came hours after the Chinese government appeared to ramp up the pressure on Hong Kong’s authorities to act.

In comments carried by the China News Service, an official news agency, the Chinese government made its highest-level denunciation yet of the protesters, accusing them of pursuing a conspiracy to challenge Beijing’s power over the city.

After police tried to clear areas of the Admiralty district, the epicenter of protests and the city government center, a group of police officers allegedly beat a protester, as seen in a video that has rapidly spread online. Hilary Whiteman at CNN reports:

The widely circulated video shows officers carrying the man to a dark corner, where he’s laid on the ground and repeatedly kicked and punched while others stand around, apparently keeping watch.

“The Complaints Against Police Office has already received a relevant complaint and will handle it in accordance with the established procedures in a just and impartial manner.”

Hong Kong’s Secretary of Security Lai Tung Kwok said the “concerned personnel will be transferred out of their current positions for the time being.” He declined to take questions. [Source]

From Keith Bradsher at the New York Times:

The Civic Party, one of the main pro-democracy political parties in Hong Kong, identified the man as Ken Tsang, a party member and volunteer social worker who specializes in helping street children. Dennis Kwok, a Civic Party lawmaker and barrister, said that he was representing Mr. Tsang and that his client had been taken to Ruttonjee Hospital here for a full examination because he feared that he had suffered internal injuries.

Mr. Kwok said that the police had also “slapped around” Mr. Tsang, and that at some point Mr. Tsang had also been struck repeatedly with an object, possibly a police baton. “He has severe bruises to his face, and he has also been kicked in the back and in the stomach,” Mr. Kwok said.

A team of a dozen pro-democracy lawyers has met with “10 or 15” of the 45 people arrested by the police during the pre-dawn demonstration, and “five or six” of those who had spoken with lawyers also complained of having been slapped or punched. While some of these additional demonstrators have also requested full medical exams at hospitals, none initially appears to have been injured to the same extent as Mr. Tsang, Mr. Kwok said. [Source]

Additional protesters have also been admitted to the hospital with injuries. Read Lai Tung Kwok’s full statement as well as one from Occupy Central for Love and Peace which details the incident. Read updates on events in Hong Kong via the South China Morning Post’s liveblog.