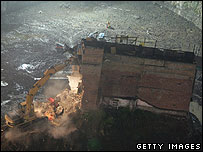 From BBC: The home of a Chinese family who defied property developers in a high-profile campaign has finally been demolished.


The family of Wu Ping gave up defending their Chongqing house after reportedly reaching a deal with the authorities.

The “nail house” – so called because it refused to be hammered down – had been isolated in a huge construction pit after other households agreed to move.

The dispute became a cause celebre for ordinary Chinese people who have tried to fight property developers.

But the struggle came to an end on Tuesday, when a few dozen people looked on as the two-storey brick building was broken up by an earth mover.

A night watchman at the building site told AFP news agency: “The stubborn nail has been removed.”

Mrs Wu, when told the house had been demolished, reportedly said: “Oh well.”

The most interesting aspect of this case …… was the fact that it was so heavily covered, particularly on the internet, which dragged in old media on its coattails. All the light and heat generated by the case had reporters and editors scrambling to find some significance beyond the fact that it had garnered so much coverage.

…… In short, the Chongqing Nail House was actually more like Paris Hilton than anything else, famous for being famous. Full of sound and fury…….signifying nothing.


And Beijing News published an editorial on this case, following excerpt is translated by CDT:

From the broader perspective of the public interest, there are at least three positive aspects of this “nail house” event:

First, the way that Mr. and Mrs. Yang used legal means to defend their own rights and interest. This is an inspiration for the Chinese public in the emerging age of civil rights. Second, The “Nail House” event became a classic case of housing property rights and urban land use, thanks to the media coverage and public attention. In fact, this is a condensed, typical example of widespread construction and eviction problems today. After this event, relevant government agencies and interested parties all must seriously reflect on its lesson. Third, media coverage of this event has been rational and constructive. This is encouraging for the future of citizens defending their rights according the law.

Local Official to Nailhouse Owner: “Whose Sky Are You Living Under?”

A Nail House in the Heart of Beijing