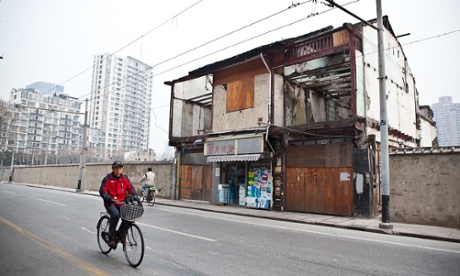 At the Guardian, Sue Anne Tay outlines the situation of many aging Shanghai residents who, after missing out on the spoils of the city’s boom years, find their 20th century brick row houses facing the wrecking ball. In her report, she describes how these lifelong residents are invoking Chairman Mao as a protest symbol of their frustration with the city’s widening class divide. From the Guardian:

East Is Red, the anthem of China’s tumultuous Cultural Revolution, was being piped out of the second-storey window of an old house located a few streets south of Xintiandi, Shanghai’s affluent downtown shopping district. The house was part of an old neighbourhood that was being demolished to accommodate the next phase of high-end real estate expansion.

But it was the slogans on the two banners hung outside the house which really caught the attention of the crowd gathered across the street. Angry over the pending loss of his home, one resident had scrawled “democracy begins with rights” on one banner – and launched a nostalgic call back to Maoism on the other: “Chairman Mao, the people miss you! Corrupt officials are scared of you!”

[…] To cope with neglect and injustice, some of Shanghai’s older generation are harking back to old symbols of authority to remind people of the party’s once-utopian roots of class equality, social harmony and corruption-free society as championed by the Great Helmsman himself, Mao Zedong. The death and violence caused by the Cultural Revolution is a blind spot; instead, these residents focus on the nostalgia of what they believe to be fairer and better days from socialism’s past.

Caught in the shifting sands of Chinese megacity development, no one, it seems, is speaking out for Shanghai’s urban poor as they are removed from their homes and priced out to distant corners they never imagined visiting, much less living in. Their call for Mao feels not so much like a genuine cry for history, but for the sense of loss of a community lifestyle – and the city they call home. [Source]