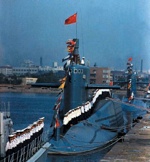 China has surprised the Pentagon with the pace of development of a new class of submarine that threatens the nuclear balance by providing Beijing with a more robust nuclear deterrent.

According to the 2007 Pentagon China military power report – details of which were obtained by the FT – the Chinese navy is developing a fleet of five nuclear ballistic missile submarines [SSBNs]. The Jin class submarines would provide a much stronger nuclear deterrent because they would be armed with the new long-range JL-2 missile.

The Pentagon last year signalled concerns about the possible development of the Jin submarine. But a senior US official said the US had been surprised by its “very quickened pace” of development. [Full Text]