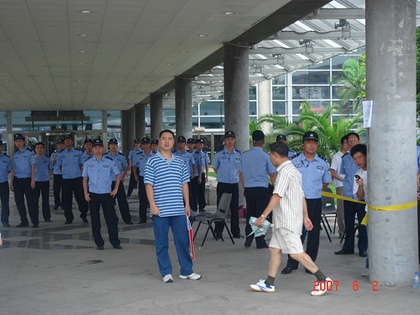 Talking about Xiamen leaders “getting angry,” here is an article on Southern Metropolitan Daily on June 3rd on the environmental protests in Xiamen on June 1st and 2nd, translated by CDT:

There were continuous illegal demonstrations and gatherings in our city today and yesterday, which have gravely disturbed social public order and obstructed the life and work of all residents.

This morning, the Internet Surveillance Department of the Bureau of Public Security detected that some photos have been falsely put together and posted online, which were of a demonstration in the square in front of the railway station on June 1st, and were meant to mislead the public. The truth is, there is construction work going on in front of the railway station and nothing like a demonstration happened in the area. Moreover, we also found some people managed to call the mayor’s special line anonymously using the name of an illegal organization “Anti-PX Alliance”, terrifying and threatening government officials. From those phenomena and other facts that are known by the public security, we have realized that the characteristics of the current event are changing, and there are signs that the illegal demonstration has been manipulated and controlled by some lawless people. We ask all residents to remain vigilant.

With that, the Bureau of Public Security urges all residents to treasure the favorable situation of harmony and stability, coordinate with the public security and follow their own lines of duty, keep highly vigilant, maintain your judgment, and be sure to avoid being used by lawless people.

The Bureau of Public Security reiterates: Illegal behavior will be severely punished according to the law.

“The illegal gatherings and demonstrations in Xiamen city on the morning of June 1st gravely disturbed public order and obstructed the life and work of all residents. According to our investigation, those demonstrations and gatherings were provoked by some lawless individuals. We ask all residents to remain vigilant.” Those were the words in yesterday’s notice passed by the armed police to Xiamen residents who gathered in front of the Xiamen government building. The notice also reads: “The Xiamen government has decided to delay the Haicang PX project. The residents should submit their opinions and suggestions through legal processes. The Bureau of Public Security will severely punish any illegal behavior according to the law.” The notice, which was released by the Xiamen Bureau of Public Security, has been aired uninterruptedly since June 1st on Xiamen Satellite TV. On June 2nd, the spokesperson of the public security released a new notice (which is enclosed above).

“Never be used by other people”

The Xiamen Daily said that the June 1st demonstration “did not end up in violence but has impacted people’s normal life and work, and has brought inconvenience to Xiamen’s transportation.”

Du Mingcong, Vice Director of the standing committee of the Xiamen People’s Congress, also noticed that the demonstration took place when the temperature was as high as 30‚ÑÉ. “We should be vigilant that a few individuals were maneuvering the demonstration to provoke public tumult. A demonstration organized on such a sweltering day will even damage the participants’ mental and physical health. It’s irresponsible behavior.”

On the evening of June 1st, the Xiamen People’s Congress, the People’s Political Consultative Conference, the Communist Youth League, and the Women’s Federation respectively convened. The speeches at those meetings were also aired on TV in turn. The general opinion: all residents should cherish more the city’s favorable situation of stability and solidarity, and offer suggestions and opinions through proper processes. “Don’t be gullible” and “never be used by other people”.

The Xiamen local media also reported that some well-known people from different quarters take turns to express their support for the government’s decision to delay the Haicang PX project. Zhao Yufen, who first stood up against the PX project, consigned a spokesperson from Xiamen University to state that she has not accepted interviews from any media reporters recently and has never authorized the media to release her opinions on the PX project. She also opined that the Xiamen government’s decision to delay the PX project and to conduct an environmental review is practical and realistic. It sufficiently exhibited that the party committee and government respect science, respect public opinion, and give importance to environmental protection.