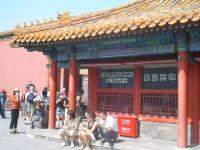 From The Seattle Times via Danwei:

Starbucks closed its store in Beijing’s Forbidden City today after months of controversy over the U.S. coffee-shop chain doing business there. The decision followed the Forbidden City’s announcement that it wants to operate all stores inside the former imperial palace, which is now a museum.

“We have respectfully decided to end our lease agreement,” the Seattle coffee chain said. Wang Jinlong, president of Starbucks Greater China, said in a written statement: “We fully respect the decision of Forbidden City to transition to a new mode of concessions service to its museum visitors.”[Full Text]