It Don’t Look Like A Red Envelope – Jonathan Ansfield 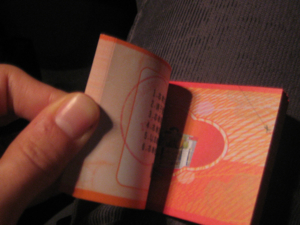 “There’s no denomination and no real issuer, but it’s money.”

Vouchers from the supermarket chain Trust-Mart (Â•ΩÂèàÂ§ö) have become a favored currency of petty corruption in Fujian, says a local entrepreneur who carries a stack on him. In the course of a recent interview about unrelated topics, by way of demonstrating how he greases the palms of tax, commerce, customs and other officials, he opened his glove compartment and whipped out the bills. Each was worth 100 yuan. “That right there is 3,000 kuai.”

Evidently, party inspectors in the free-wheeling province can catch on to more glamorous enticements like cash, apartments, junkets and jade mantelpieces. But these gift certificates are conveniently untraceable and unmarked but for the stamp of the company and carry the down-home label tihuodan ÊèêË¥ßÂçï, literally “bills of lading”, evoking tickets people used to trade for commodities like rice and pork in the state-planning days. “If you don’t believe me, I’ll sell you one,” he said. “If it doesn’t work, I’ll buy it back!” 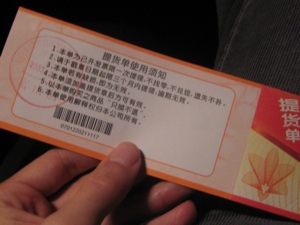 There was no need. At a neighborhood branch of the Taiwanese store, now 35 percent-owned by Walmart, a shop-girl gave assurances that the ticket was good for anything in the three-floor store at any Trust-mart in Fujian for as long as the hypermarts exist. “But you can’t get any change. So you better spend the whole thing.”

That’s been a critical drawback. Just this past week, in fact, local company headquarters instructed stores in Fujian to discontinue selling the tihuodan, which have been available for about three years, clerks at the service counter revealed. A crackdown on soft bribes? Not exactly. The clerks then proceeded to pitch a more flexible replacement: Trust-Mart debit cards. 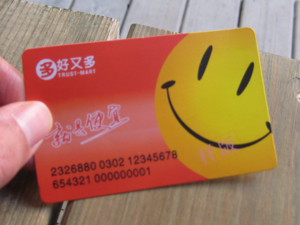 The cards, which carry a credit limit of 20,000 RMB, are only good for one year and must be used at the store of purchase. But they are fully renewable, transferable and anonymous, as theconditions on the back of the promotional mock-up (pictured) stipulate, with nodesignated user or password – a perfectly acceptable gift for a small-time official (or his wife). “Very practical,” commented one clerk. So who customarily uses these cards? Can they be a conduit for bribery? When asked, she would only smile and blush.