The following censorship instructions, issued by government authorities, have been leaked and distributed online.

“If you encounter a foreign reporter conducting interviews, if they have a press card and legal permission to report, you can positively publicize and introduce our development achievements in recent years, that villagers live and work in peace and other positive information, and take this opportunity to publicize our rural development achievements; do not interfere. If it enters sensitive territory, you can persuade them to leave.”

The government office is requested to inform all units, and all township neighborhoods are required to carry out work as required by the Foreign Affairs Department at the higher level. (October 26, 2019) [Chinese] 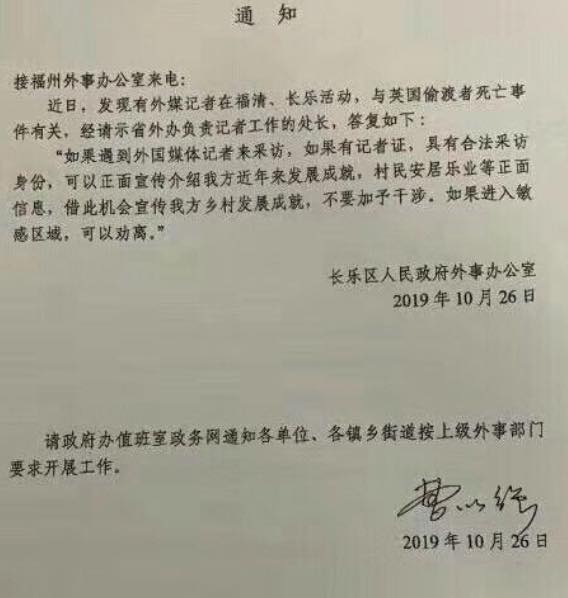 On October 23, 39 dead bodies were discovered in the back of a truck in Essex, United Kingdom. Initially, police announced that the victims were Chinese nationals, but it is now believed that they were trafficked from Vietnam.

Fujian Province is the origin for most Chinese emigrants, and has also been a base for human trafficking. Conor O’Clery of the Irish Times reported from Changle soon after the bodies were discovered in Essex, before their nationality was confirmed:

Most emigrants from the province travel legally and overstay, but a minority of desperate young men and women fall into the clutches of criminal gangs known as “shetou”, or snakeheads, who at that time were smuggling some 100,000 people out of China each year.

In Changle, a district of the provincial capital Fuzhou, residents told me that people-smuggling was regarded as more lucrative than cocaine-dealing, with snakeheads demanding up to €50,000 for passage to England.

[…] Relatives and friends of smuggled emigrants were reluctant to talk to a foreigner about the migrant tragedy in Dover for fear of police harassment. They also worried about reprisals by snakehead thugs who did not want exposure of their methods or of the dire conditions suffered by their customers.

The issue was very sensitive for the Chinese authorities as well, so much so that when interviewing an artist in the coastal town of Jinfeng, I was roughly detained by security police, my interpreter had her face slapped, and I was ordered back to Beijing. [Source]