While Steven Spielberg’s withdrawal from his role as an artistic adviser was a public relations blow to the Beijing Olympics, the announcement this week that Haile Gebrselassie would not run in the marathon at this summer’s Games hints at a more serious challenge facing the organizers. Unlike Spielberg’s, the decision of the Ethiopian world record holder in the marathon has nothing to do with politics: Gebrselassie is asthmatic, and he is concerned that Beijing’s polluted air could damage his health over the 42-kilometer race. (He still plans to run the far shorter 10,000-meter event.) And the Ethiopian’s concern has underscored the stakes in a showdown between city officials and an 26-year-old American environmental consultant who has raised serious questions about Beijing’s official air pollution statistics. 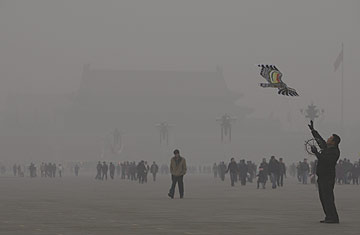