Who Is That “Small Minority of People” Who Are Attacking and Burning Lhasa? 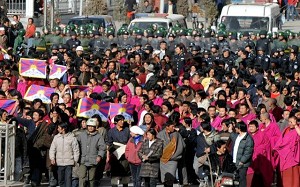 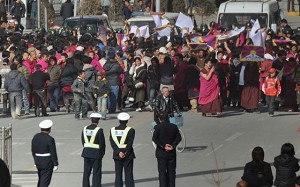 Here are some relevant information about the Tibet protests. First, Xinhua’s account of the events in Lhasa:

Xinhua, in Chinese, Saturday Morning 1:30 AM

Responsible Person in TAR Says that A Very Small Minority of People are Attacking, Smashing, Shooting and Burning, answering queries from a Xinhua Journalist

Xinhua March 14 Lhasa. In recent days, a very small minority of people have been attacking, smashing, shooting and burning, disturbing public order and harming the safety of the lives and property of the masses. These is sufficient evidence to say that this been plotted, organized and painstakingly planned by the Dalai clique. This has already aroused great anger and strong condemnation among all the nationalities of the TAR. The relevant departments in Tibet are according to law taking appropriate measures. We are entirely capable of preserving Tibet’s social stability and protecting the lives and property of all the nationalities of Tibet. The plots of a small minority is scheming to destroy the stability and harmony of Tibet is not winning the hearts of the people and so is doomed to failure.

The following commentary about the demographics behind the Tibet protests is translated from a Chinese text:

While Tibetans have very serious grievances including racism and broad spectrum oppression, there are also other factors including demography and employment.

Tibet’s population is very young. The median age in a population is according to some scholars linked to phenomena such as violent crime which is committed disproportionately by people in their 20s. Now the median age in the U.S. is 36 years up from about 27 years in 1968. The U.S. 60’s youth culture culminated that year — which also the year the U.S. had the lowest median age over the past 70 years. See here.

I did a little looking around and found data on Tibet’s (Tibetan Autonomous Region) median age and China’s median age in 2000. Tibet: 21 years (half the population was under 21 in 2000), China: 28.95 years. China’s population had a median age of 21 back in 1978, just five or so years after China’s birth rate started its sharp decline. Family planning rules are not applied to the TAR countryside, but do apply in cities, particularly for government workers and party members. Thus Tibet has a very different demographic profile than the rest of the PRC. Probably true of Xinjiang as well, where relaxed family planning rules apply in the countryside. China’s median population is projected to increase to 33.21 years in 2010, 35.44 years in 2020, 38.51 years in 2030, and 40.58 years in 2040. So the demographic contrast between the TAR and the PRC will continue to widen for many years to come.

Think about unemployment. Many Chinese provinces let off some pressure by the large numbers of people who go off to other provinces to seek work. This is much harder for Tibetans, (and similarly for Uighurs, I think) because of the big language barrier they face in a Chinese speaking world and the alienness of Han culture to them. So rural unemployment in Tibet is a bigger problem (even allowing for serious poverty and lack of development) since the safety valve can’t work as well as it does in the provinces of the interior. Now discrimination in employment that Tibetans feel is sometimes due to ethnic Han racism against them, but probably is often because many Tibetans can’t speak Chinese as well as migrant competitors from the interior. (I saw the same problem in Xinjiang ten years ago), even so, it is felt as discrimination against them as Tibetans. Then there is discrimination for political reasons, with tour guides being the most famous example, since Tibetan tour guides might say politically incorrect things. Not to mention the herders who are settled in cities with nothing to do.

Here is a video clips from RussiaToday: