The recent anti-France (Carrefour) protests are still spreading within China, and Chinese cyberspace is flooded with angry “patriotic” messages. But this is not the only voice being expressed online. For example, blogger He Yanguang (贺延光) wrote on his blog: “I don’t boycott things from France, I only boycott idiots 不抵制法货，只抵制蠢货.” Now searching this phrase online, one can find more than 45,500 results.

The following images have been circulated in many online forums and blogs inside of China. 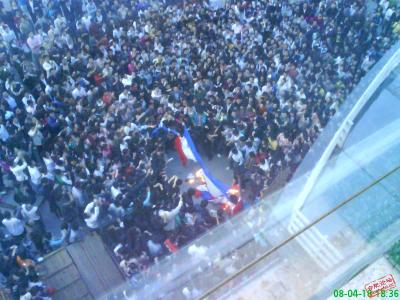 And here is a hilarious cartoon, made by Guaiguai (乖乖), addressing the same phenomenon:

Cartoon caption: A group of patriotic youth came back from their anti-Carrefour protests, still very excited. Suddenly, they saw something that looked like a French flag lying in the shadows. They immediately surrounded it and beat the flag up. The flag shouted: “Please, I am the Dutch flag!” The patriotic youth shouted back: “Shut up! Do you really think I can’t recognize you just because you are lying down?!” 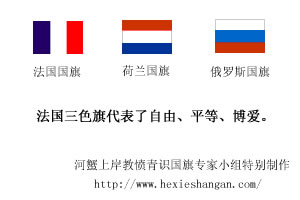