Chinese Internet Wages War on Its Own Liberal Media 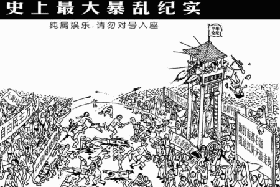 An excellent summary from Joel Martinsen at Danwei of the battle raging online between Chinese nationalists and Chinese advocates of free speech, launched a couple weeks ago when Southern Metropolis editor Chang Ping wrote a blog post advocating press freedom as the best way to get to the bottom of the Tibet riots.

As part of his post on the topic, Martinsen translates an op-ed on China.com, written by one Wen Feng, that labeled Chang Ping a traitor and set off a flurry of mutual recriminations:

A man named Southern Metropolis Chang Ping, who recently ran afoul of a group of netizens, might want to make another argument for free speech in the belief that the netizens have stripped that right from him. I do not usually concern myself with online forums, but the netizens’ broadsides were so fierce this time that I took a look at the so-called speech of this Southern Metropolis Chang Ping. I noticed immediately that this individual had brought “free speech” to an appalling or even “terrifying” degree. The heart of the matter for which he was criticized was this: “Free speech intrinsically includes the freedom of mistaken speech and particularly the freedom to question authority. More frightening than rumors is the removal of free speech.” And he openly held this up as a universal value. According to his logic, “free speech” means that you can muddy the truth, fabricate facts, indiscriminately distort history, speak irresponsibly, “freely” rumor-monger, “freely” smear, “freely” toss about labels. Just like the western media’s hysterical performance on the issue of China’s Tıbet. Was that free speech? That was violent speech. I have never seen the western media enjoy that kind of freedom of speech in their own country, because that would be an infringement on the rights of others, and it would trample social justice and betray fundamental ethical principles. If this is the “universal value” that Southern Metropolis Chang Ping wants to protect, then honor is the price he pays in return.

In a similar vein, Global Voices’ John Kennedy examines the frightening case of a Chinese student at Duke University who became the subject of a “human search engine” witch hunt after she was seen talking to pro-Tibet protesters.