Despite government efforts to rein in virulent nationalist sentiment, demonstrations against foreign media, French supermarkets, and others viewed as being “anti-China” took place across the globe today. In China, protests were staged in front of the French embassy and Carrefour stores. From the Washington Post:

At the French Embassy, a short line of cars carrying banners that read “Tibet Belongs to China” in Chinese, English and Japanese circled the perimeter, with at least one car blaring the Chinese national anthem, according to witness reports. Police, some in riot gear, quickly cordoned off the area, and the protesters left after about 30 minutes. Streets around the embassy remained blocked into the evening.

Large protests erupted at Carrefour stores in at least five Chinese cities Friday night and Saturday. Carrefour became a target of Chinese anger after rumors spread online that LVMH, the luxury goods company and largest single shareholder in Carrefour, had given money to the Dalai Lama, the Tibetan spiritual leader, whom China accuses of organizing the Tibetan protests and disrupting the Olympic torch relay. Chinese activists sent a blast of cellphone text messages calling for a May 1 boycott of the retailer, which has more than 100 supercenters in the country.

In Paris, protesters also gathered to express their indignation at the treatment of the Olympic torch relay during its Paris leg. The AP reports:

Organizers say between 6,000 and 7,000 turned out for Saturday’s protest, at Paris’ Place de la Republique. Police officials put the number of demonstrators at around 3,500.

Many of the demonstrators were wearing t-shirts emblazoned with the phrase “Let’s make the Olympics a bridge, not a wall,” in French. Many appeared to be Chinese citizens living in France.

And in Los Angeles, protesters condemned CNN for statements made by commentator Jack Cafferty. From the Los Angeles Times:

“We understand free speech,” said Lake Wang, 39, of Thousand Oaks. “But what if Cafferty said this about other racial groups? I think he would be fired. I think he’s jealous of China.”

Also, thousands of Chinese students and expatriates convened in London to protest against the BBC and other British news organizations. From China Daily:

“We come here with a sincere aspiration to raise people’s awareness of the media distortion, we try to provide British people with some essential information that was lacking on BBC and other western media; people will make their own judgment with this missing part of the truth“, said Miss Qin, an economics student from Cambridge University. 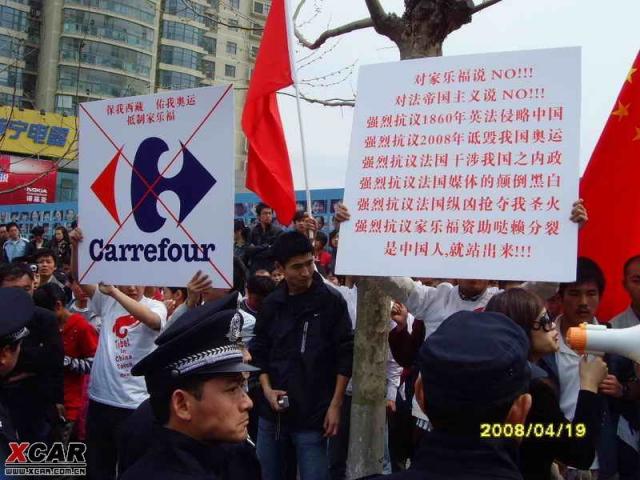 The above photo was taken during the Anti-Carrefour protests in Qingdao, Shandong Province on April 19, 2008. Slogans in the photo, Translated by CDT:

Following photos are from wenxuecity.com: