Following their previous report on a hacker who found more evidence of gymnast He Kexin’s real age, the Times is now reporting:

An IOC official told The Times that because of “discrepancies” that have come to light about the age of He Kexin, the host nation’s darling who won gold in both team and individual events, an official inquiry has been launched that could result in the gymnast being stripped of her medals.

The investigation was triggered as a US computer expert claimed today to have uncovered Chinese government documents that he says prove she is only 14 – making her ineligible to compete in the Olympics – rather than 16, as officials in Beijing insist is her age. 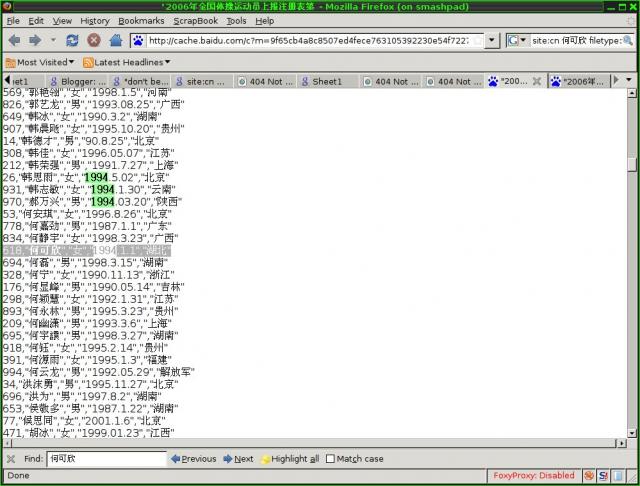 Despite persistent questions about the ages of several members of the Chinese women’s gymnastics team that won the gold medal, the International Olympic Committee said Friday there is still no proof anyone cheated and believes the controversy will be “put to rest.”

China has again given the governing body of gymnastics documents that show its athletes are eligible, and coach Lu Shanzhen said the girls’ families are “indignant” that the issue won’t go away.

“It’s not just me. The parents of our athletes are all very indignant,” Lu said in an interview with The Associated Press. “They have faced groundless suspicion. Why aren’t they believed? Why are their children suspected? Their parents are very angry.”

…”Surely it’s not possible that these documents are still not sufficient proof of her birthdate?” Lu asked. “The passports were issued by the Chinese Foreign Ministry. The identity card was issued by China’s Ministry of Public Security. If these valid documents are not enough to clarify this problem, then what will you believe?

“The Chinese government and the Chinese athletes must be respected,” he added.

But many bloggers are not as convinced as IOC officials. Here is one Chinese blogger’s additional findings and analysis about He Kexin’s age. Here is also a Hong Kong based blogger’s take – “No happy ending to gymnasts scandal”

People asked why lip-sync girl, the digital footprints and non-ethnic ethnic children — all from the Opening Ceremony — were such a big deal. They weren’t, taken individually. But together — along with gymnast Yang Yun’s statement that she was under the legal age when she won two bronzes in Sydney — they set a tone that made people even more suspicious when the serious issue of falsifying documents came up.

Xu Xing: Apology for No Reason

BOCOG: “I Do Not Think There Was Any Wrongdoing”

With Same Score, China’s He Beats Liukin in Uneven Bars

In An Ancient Land, Age Is Just A Concept For Some Competitors