Torch Relay Ends with a Bang (Updated with video)

BBC is reporting that four foreigners have been arrested in Beijing for scaling 120-foot light poles and unfurling 140 square foot pro-Tibet banners outside the Bird’s Nest stadium during the final leg of the Olympic torch relay:

Meanwhile state media reported that four pro-Tibet activists from Britain and the US had been arrested in Beijing after a brief protest close to the Olympic stadium.

Students for a Free Tibet is taking credit for the stunt. 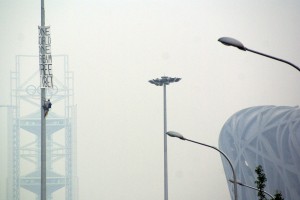 The Xinhua reports, via the China Daily: 4 foreign nationals ordered to leave China:

Two Americans and two British nationals have been ordered to leave China “within a prescribed time limit” after displaying “Free Tibet” banners near an Olympic venue in Beijing on Wednesday, local police said.

Two are expected to leave on Wednesday night and the other two on Thursday.

“They disrupted public order and violated Chinese laws. Their period of stay in the country will hereby be cut short according to the Law of the People’s Republic of China on Control of the Entry and Exit of Aliens,” the Beijing Municipal Public Security Bureau said in a statement issued late on Wednesday.

The four, three men and one woman, had entered China on tourist visas.

They gathered at about 5:47 am at the Beichen Overpass near the National Stadium, or Bird’s Nest, in Chaoyang District in northeast Beijing.

Two of the men climbed up two electricity poles and hung the banners.

One banner bore large black letters declaring “One World One Dream Free Tibet,” while the other said: “Tibet will be free” in English and “Free Tibet” in Chinese.

Local police rushed to the scene 12 minutes later and took them away.

The Guardian reports: Tibet demo Britons ‘to be deported‘:

Two British Free Tibet campaigners are in custody in China after unfurling a Tibetan flag and banner outside the Olympic stadium.

Lucy Fairbrother, 23, and Iain Thom, 24, were arrested in Beijing alongside two US activists. All four are expected to be deported at the earliest opportunity, according to Chinese news agency Xinhua.

As the British Embassy in the Chinese capital continued to try to get access to the pair, who are members of Students for a Free Tibet (SFT), their families spoke of their pride.

This news on the web, via Google News.