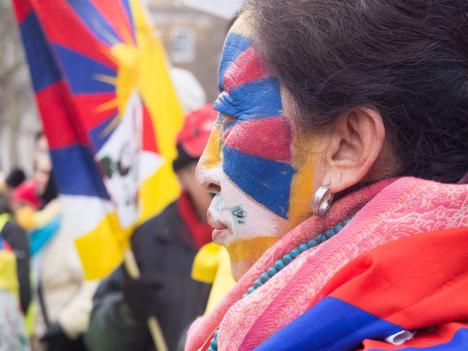 Protesters gathered around the world on Tibetan Uprising Day to commemorate the twin anniversaries of the failed March 10, 1959 Tibetan uprising—which resulted in the Dalai Lama fleeing China—and unrest which culminated in violence on March 14, 2008. The 2008 protests have since spurred increasingly repressive policies in the region, many of them architected by Chen Quanguo, Party secretary of the Tibetan Autonomous Region from 2011-2016 (Chen was transferred to Xinjiang in 2016, where he has overseen similar repression). Such policies included criminalizing traditional Tibetan social activities, grid-style social management, and under his successor, mandatory political and religious training for monks and nuns. Since 2009, 155 Tibetans have self-immolated in protest of Beijing’s policies. For The Guardian, Lily Kuo details the increasingly grim situation in Tibet:

“Tibet today is effectively run as a huge open-air prison,” said John Jones, a campaigns manager at Free Tibet, an advocacy group. “Any sign of dissent, from flying the Tibetan flag to possessing pictures of the Dalai Lama … is treated as a state security crime. The level of state control has been stepped up to the point of being suffocating.”

Local authorities have banned monasteries in Tibetan areas, a key source of education in the region, from teaching for fear of “ideological infiltration among the young”, according to a notice in Qinghai province found by Human Rights Watch. Last year a language activist named Tashi Wangchuk was sentenced to five years in prison for “inciting separatism”.

[…] The Lhasa police posted on 5 March about a citywide search for potential threats to stability that involved the entire police force “united in iron will”.

The post on Weibo included photos of police squadrons at different places in the city, lines of police cars, and searches of what appear to be Tibetan homes and establishments, as well as hotels, internet bars and shops. In Lhasa, 200 taxis have been equipped with facial recognition technology, according to a report last week. [Source]

In anticipation of these two anniversaries, Beijing clamped down by banning foreign travelers until April, claiming that they could not handle the high altitude. It is now vigorously defending its Tibet policies, stating that detractors show “anti-Chinese bias.” For AP, Christopher Bodeen notes Tibetan protests in New Delhi, and relays Chinese state-run media’s comments in the midst of large-scale protests:

In India’s capital, New Delhi, at least 3,000 Tibetans marched about 3 kilometers (2 miles) through the center of the city on Sunday carrying Tibetan and Indian flags. Invoking India’s concerns over China’s expansive power in Asia and beyond, the marchers shouted slogans including “Tibet’s freedom is India’s security” and “India-China friendship is a sham.”

[…] “Sixty years since the epoch-making democratic reform in Tibet, people in the plateau region have enjoyed unprecedented human rights in history,” Xinhua said.

“Undeniable facts and figures” related to development “debunk the repeated lies and accusations that aim to smear Tibet’s human rights with vile motives,” it said. “Anyone without bias will recognize Tibet’s tremendous progress in human rights.”

Among the figures it cited were a rise in life expectancy of 35.5 years in the 1950s to nearly 70 now; a double-digit growth in regional GDP over the last quarter-century; and reduction of poverty by 80 percent. [Source]

A video report from Hindustan Times shows Tibetan protesters being forcibly removed by Indian police during the New Delhi protest:

Protests were also staged by exiled Tibetans and activists in other cities across the globe, including Dharamsala, Taipei, Boston, and Calgary.

While Congress has passed the Reciprocal Access to Tibet Act of 2018—which calls for banning Chinese officials that exclude U.S. citizens from Tibet—in an interview with PRI, President Obama’s special coordinator on Tibetan issues Sarah Sewell stated that it lacks the same weight as direct action taken by the executive branch:

“Increasingly, we see that countries that have typically spoken out on behalf of Tibet are now shying away from doing so,” Sewell said. “Heads of state, leaders of parliament, are more reluctant to meet with His Holiness the Dalai Lama. This means that the symbolic act of visibly, for example, having the president or the secretary of state welcome His Holiness the Dalai Lama into official meeting rooms is really important diplomatic symbolism. That’s absent right now.”

Sewall says the US has been silent recently on any issues relating to Tibet, except the passing of the Reciprocal Access law by Congress.

“Congress … has essentially provided that legislation to the Trump administration,” she said. “Many people had been working for some time on reciprocity because people can’t travel to the Tibet Autonomous Region, whereas, the Chinese have enormous freedom within the United States, so the law’s a good thing. It’s just that it comes from Congress, not from the executive branch. And there are many things that the Congress cannot do. The Congress cannot make the president of the United States meet with His Holiness the Dalai Lama.”

“But there’s a huge difference between remaining silent and stating positions,” she said. “At this point, we don’t even have the moral leadership of pointing out the importance of this issue. We aren’t engaging the Chinese in a public way on these issues.” [Source]

For more on the ongoing human rights crisis in Tibet, see a program from Al Jazeera on the 60th anniversary of the uprising, or read a wide-ranging recent interview with Tibetan historian Tsering Shakya.