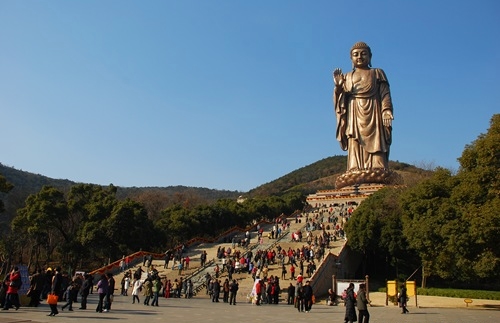 As part of the Chinese government’s national campaign to “Sinicize” religion, authorities are imposing new political demands on Tibetan Buddhists, requiring select monks and nuns in the Tibet Autonomous Region to undergo mandatory political and ideological training designed to produce a new generation of “patriotic religious professionals” versed in state propaganda. The government is hoping to expand political indoctrination in monasteries through these individuals, who are expected to help promote the Party among fellow monastics and reshape the Tibetan Buddhist tradition according to Party ideology. From Human Rights Watch:

Under the “Four Standards” policy introduced in TAR in 2018, monks and nuns must demonstrate – apart from competence in Buddhist studies – “political reliability,” “moral integrity capable of impressing the public,” and willingness to “play an active role at critical moments.” The implication is that they must agree to forestall or stop any attempts to protest state policy.

[…] The “Four Standards” policy followed September 2017 revisions to the 2005 Regulations on Religious Affairs and is based on ideas discussed at the national-level Conference on Religion Work in April 2016. A select group of Tibetan monks and nuns attended a three-day training session, from May 31 to June 2, “to strengthen their political beliefs,” state media said, and to prepare them to conduct the campaign in their own monasteries and communities. The number of participants was not revealed, but a political training course for Tibetan monks and nuns in September 2016, which appears to have been a pilot program, involved 250 participants. Monks with outstanding religious knowledge were selected for the training, and it is unlikely that they could refuse to participate. Those who meet the “Four Standards” are rewarded with benefits and status but required to work actively as political educators.

A recent Global Times report describes the trainees with a term generally used for local officials responsible for relaying party and government policies and propaganda at the grassroots level (Ch: Xuanjiangyuan/Tib: sGrog ’grel pa). This indicates that the government has broadened the term to cover monks and nuns selected on the basis of political reliability. Recruiting monastics to promote the party and government is more effective, according to Xiong Kunxin, the expert the Global Times quoted, because “they have a better understanding of the thoughts and habits of their own group.” [Source]

The new propaganda strategy in Tibet comes amid a broader quest by the Chinese state to build its soft power as it pushes forward its Belt and Road Initiative. This is being done in part through greater engagement with neighbouring Buddhist countries and management of religious institutions at home. At The Diplomat, Rinzin Dorjee looks at Chinese efforts to increase overseas investment in Buddhist projects as it works to gain  support in appointing the future Dalai Lama.

China also build the Lotus Sutra tower in Colombo, the capital of Sri Lanka – but in the mind of Professor Patrick Mendis, a commissioner of the U.S. National Commission for UNESCO, the building has a deeper symbolic significance. Mendis writes that the Lotus Tower, “emanating from the Lotus Sutra in Buddhism, is a narrative for Beijing to formulate a sustainable and peaceful ‘soft power’ strategy that would appeal globally.”

Nepal, the birthplace of Buddhism, happily welcomed the BRI and was offered $3 billion for the Lumbini project, designed to expand the small Nepali town where Buddha was born into “the premier place of pilgrimage for Buddhists from around the world.” The funds for the project were channeled through the Asia Pacific Exchange and Cooperation Foundation (APECF), whose executive vice president, Xiao Wunan, “is a member of the CCP and holds a position at the National Development and Reform Commission, a state agency,” according to Al Jazeera.

[…] In future, however, the CCP will hope to use this soft power investment for another goal: to seek recognition from Buddhist countries for Beijing’s appointment of the 15th Dalai Lama. In Tibet, CCP preparations to install the 15th Dalai Lama are in full swing. Order No. 5, implemented since 2007, was the first signal of Beijing’s attempt to intervene in the reincarnation system of Tibetan Buddhism. After the prayers offered by the Gyaltsen Norbu at the Lhamoi Lhatso Lake – traditionally a place of pilgrimage during the search for a new Dalai Lama — on 18 August 18, 2018, Dharamshala needs no further explanation of the intention of the Chinese government.

[…] China’s investment in the BRI and its Buddhist soft power are a double edge sword that China is wielding. The pressure will be high for Buddhist countries in a debt trap to do what China wishes, and the soft power gambit provides the rationale these countries need to follow China’s lead. [Source]

Constraints on religious freedom have tightened under Xi Jinping’s leadership. The forced closure of Beijing’s Zion church in September represents a heightened assault on independent Christian “house” churches and a further escalation of repression that was previously seen in mass church demolitions, cross removals, and the detention of Christian activists. The landmark agreement signed last month between the Vatican and China over the appointment of bishops, which according to a recent New York Times op-ed by retired Hong Kong cardinal Joseph Zen shows the current Pope’s lack of understanding of China, further illustrates Beijing’s desire to assert control over religious institutions in the country. Saša Petricic at the CBC reports on the continued plight of religious groups fighting for their survival amid the clampdown:

“Why are you wearing the local committee badge?” Pastor Xu Yonghai asked the guard. “You’re with the national security agency.” The order to stop us from seeing him came from higher up, he suggested.

The pastor escorted us up to his apartment. With a cross on one wall and a row of Bibles on a bookshelf, his one-room home doubles as a church once a week.

[…] “The political pressure on us is growing,” Xu said, over tea at his kitchen table. “The room for free belief has shrunk.”

Like the pastor, many of his 30 or so parishioners at the Holy Love house church consider themselves dissidents, fiercely opposed to the government’s attempts to restrict religious movements in China. And like the pastor, most of them have served time in jail for their protests.

He’s convinced his phone is tapped and worse is yet to come.

“Just like you were obstructed today, police have stopped our people from attending the service,” Xu said. “We had to move our meetings from Fridays to another day, and we frequently change locations.” [Source]

Religion has long been seen as a challenge to the officially atheist Communist government. The rapid growth of Christianity in the country, for instance, has been cited as a cause for concern for the government as some predict that the number of Protestants and Catholics will surpass that of Party members. The fear-based narrative has also been used to understand government efforts to maintain control over religious practices in Tibet and Xinjiang, where religion is seen as a threat to national integration. However, Bonnie Girard at The Diplomat writes that the CCP’s clampdown on religion is not so much driven by fear but by “contempt”:

In short, much of officialdom sees religion and a belief in God as beneath them.

One PLA colonel, who had been posted to Tibet for nine years in the 1970s and 1980s, said of the Chinese presence in Tibet, “We had to save them. They were often naked. They were superstitious and worshiped wooden statues. They were very backward people who needed us to improve their lives. This was our duty.” He was speaking with utter sincerity.

[…] Chinese officialdom doesn’t fear religion itself because it doesn’t see its intrinsic value. Yes, the Party is always girded against the behavior that religion may inspire, from rebellious thought to outright revolt. And it dislikes having to deal with international pressure to improve its religious rights record. But fear is a small component of this. It is difficult to fear the power of something you do not respect.

[…] Almost exactly one year ago, the CCP issued warnings to Party members to refrain from prayer to God, and worship of Buddha, “because communism is about atheism and superstition is at the root of many corrupt officials who fall from grace.”

Citing superstition and religion in the same breath, the People’s Daily article continued, “Superstition is thought pollution and spiritual anesthesia that cannot be underestimated and must be thoroughly purged.” [Source]

Elsewhere, Republican Senator Chuck Grassley published an article in Politico condemning China for persecuting religious minorities and calling on the U.S. to defend religious freedom as a central part of the bilateral relationship.

Communist leaders in China try to explain away these abuses by reiterating their commitment to preserving the Chinese culture, a practice known as sinicization. Approximately 100 million people in China belong to religious groups that are outside what the Chinese government deems acceptable. That’s approximately 100 million people who are subject to persecution by communist leaders in China, and even those that practice an officially sanctioned religion have not been spared harassment. That persecution stems from religious differences and has spread to other areas of daily life, including the restriction of social media.

The United States doesn’t have the singular authority to stop the religious persecution occurring in China, but it can apply significant pressure to Chinese leaders by linking the need for religious freedom to the economic and political aspects of our bilateral relationship that are important to China. As China’s largest trading partner, the United States is in a powerful position to influence Chinese leaders and stand up for human rights. Fighting for religious liberty should be a central part of the United States’ relationship with China. Senator David Perdue and I, with a bipartisan group of senators, recently introduced a resolution condemning violence against religious minorities in China and reaffirming America’s commitment to promote religious freedom and tolerance around the world. It also calls on China to uphold its Constitution and urges the President and his administration to take actions to promote religious freedom through the International Religious Freedom Act of 1988, the Frank R. Wolf International Religious Freedom Act, and the Global Magnitsky Act. [Source]

A Chinese Foreign Ministry spokesperson has subsequently issued a response and referred to Grassley’s claims as “groundless accusations.”