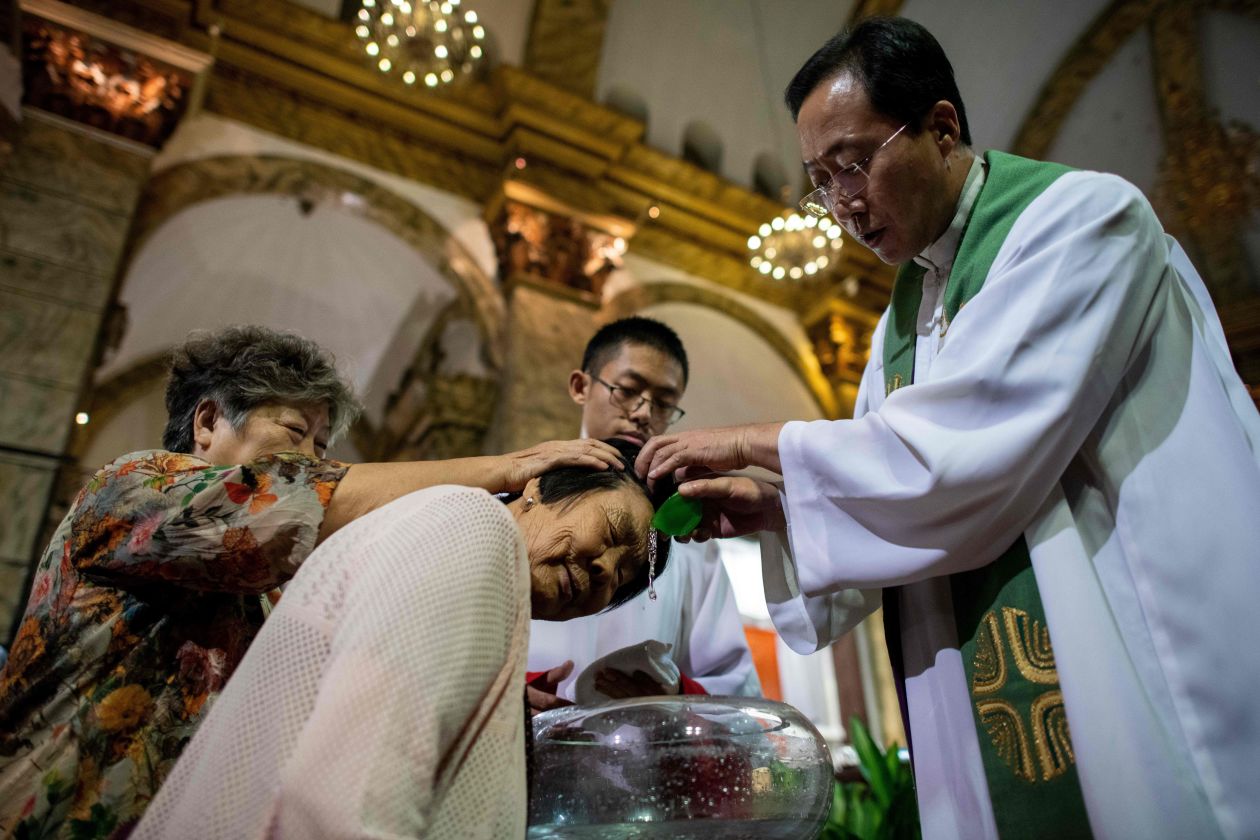 The Vatican signed a landmark agreement with China on Saturday on the process for appointing bishops. The deal marks a historic breakthrough after years of negotiations, resolving a decades-long struggle over the management of Catholic leadership in the country. The provisional agreement allows the Holy See to veto new nominees proposed by the Chinese government while also giving Beijing a decisive role in the appointment process as the Vatican will no longer approve ordinations without Beijing’s permission. Chico Harlan at The Washington Post reports:

The deal paves the way for bishops to be recognized by the Vatican and the Chinese government, a step toward ending the current system — one that has divided followers — in which some bishops are backed by only one side or the other.

[…] Estimates put the number of Catholics in China between 10 and 12 million. About half are affiliated with government-managed churches. Citing “Vatican sources,” Reuters said the deal gives the pope veto power in the naming of candidates for bishop.

“Pope Francis hopes that, with these decisions, a new process may begin that will allow the wounds of the past to be overcome, leading to the full communion of all Chinese Catholics,” the Vatican said in a statement.

[…] The Vatican said its agreement with China “is the fruit of a gradual and reciprocal rapprochement” and includes a possibility for “periodic reviews of its application.” [Source]

Details of the agreement have not been made public. It remains unclear how much say Pope Francis will have in vetting Beijing’s bishop nominees and whether formal voting will be part of the consultation process. In exchange for the signing of the deal, the Vatican recognized the legitimacy of seven formerly excommunicated state-appointed Chinese bishops, two of whom will replace underground bishops who are not approved by Beijing. Both sides can still back out of the deal at any time as it remains only provisional. The Wall Street Journal’s Francis X. Rocca and Eva Dou look at the uncertainties surrounding the deal:

People familiar with the matter said ahead of the signing that the agreement allows for the possibility of revisions after one or two years if either party sees the need.

Among the important unknown details about the agreement are whether the pope will have a choice of nominees or merely a right of veto over a single candidate at a time; and how thoroughly the Vatican will be able to vet bishop candidates ahead of time.

The agreement also leaves unresolved the fate of some 30 so-called underground bishops recognized by the Vatican but not by China.

Another complication is a major discrepancy in the number of dioceses recognized by the two sides. The Vatican tallied 144 Catholic dioceses in the country by the end of 2017, while the Chinese government’s count was only 96, according to the Holy Spirit Study Center in Hong Kong.

On Saturday, the Vatican announced that the pope was recognizing a new diocese of Chengde, which the Chinese government established in 2010 for excommunicated Bishop Guo Jincai, one of the seven newly recognized bishops. That would bring the Vatican’s count to 145. It is unclear whether Beijing will nominate bishops to lead the dioceses it hasn’t recognized until now. [Source]

The New York Times’ Ian Johnson writes that, for China, the agreement is likely undertaken as part of a broader campaign to bring Christianity and all other religions under tighter state control. The Vatican-China deal comes amid an intensifying crackdown on freedom of religion and a concerted effort by the state to “Sinicize” faith groups.

Beijing’s goal in the agreement, however, appears to be the same as with the church demolitions: greater control over the rapid spread of Christianity, which gained a permanent presence in China in the 16th century.

[…] The ruling Communist Party sees the compromise with the Vatican as a step toward eliminating the underground churches where Chinese Catholics who refuse to recognize the party’s authority have worshiped for generations. With the pope now recognizing all bishops and clergy members in the official Catholic churches approved and controlled by the party, the underground church may have no reason to exist.

[…] Millions of these believers stubbornly resist government control. In some parts of China, the Catholic populations of entire counties attend underground churches, and the party-controlled churches stand almost empty, their clergy ignored.

All of this could change under the rapprochement between the Vatican and Beijing.

Several underground bishops in China, including two popular bishops in staunchly Catholic parts of the country, are expected to step down to make way for the bishops appointed by Beijing over the past decade whom the pope has agreed to recognize. In exchange, the pope is gaining some role in the appointment of new bishops. There are about 100 bishops and prelates in China, including underground and approved, and a dozen vacant positions. [Source]

Critics are calling the agreement a capitulation and sell out to the officially atheist communist government. The controversial deal has sparked concern over the potential implications for religious freedom, with many worried that it would give the Chinese government undue authority to rein in Catholics in China and bring about greater oppression. From Ben Westcott at CNN:

[…C]ritics have questioned why the church, historically a defender of human rights and Christian values, would willingly join forces the increasingly authoritarian Chinese government, which is officially atheist.
Speaking to Reuters, Catholic Cardinal Joseph Zen of Hong Kong said the Church’s deal was an “incredible betrayal” and accused the Vatican of “giving the flock into the mouths of the wolves.”
[…] Amnesty International China Researcher Patrick Poon told CNN the agreement created serious concerns for freedom of religion in China in the future.
“Such an agreement will effectively set a very bad precedent for other religions (in China) … It will put Catholics under a lot of pressure,” he said. [Source]

Sociologist Terry Halliday posted the following on Twitter, with reference to the plight of Guangdong’s Peter Zhuang Jianjian, one of the two bishops asked by the Vatican to step aside in favor of state-backed ones as part of the deal:

How heartrending that this “betrayal” of much-hounded Bishop Zhuang Jianjian & fellow sufferers for faith should come from #Pontifex, so often aligned with the poor and weak, not the powerful and brutal. @emilyrauhala @marcorubio @benedictrogers @patrickpoon @williamnee https://t.co/Kxk2UzZDtb

Elsewhere, Cardinal Joseph Zen, the former head of the Catholic Church in Hong Kong who led the opposition against the Vatican’s growing rapprochement with China, has called on the Vatican’s Secretary of State Pietro Parolin to resign, citing that the church has eroded its credibility for compromising with a repressive government. James Pomfret and Anne Marie Roantree at Reuters report:

He described Parolin, the highest ranking diplomat in the Vatican, as someone who despised heroes of faith.

“He should resign,” Zen told Reuters at his home on a wooded hillside on Hong Kong island.

[…]  Zen said he believed only half the underground church in China would accept a deal and was concerned how the remainder might react.

“I’m afraid they may do something irrational, they may make rebellion,” said 86-year-old Zen, a former bishop of Hong Kong and the most outspoken critic of the Pope’s China strategy.

[…] Zen said he believed any deal with atheist China would deal a significant blow to Pope Francis’ credibility.

“It’s a complete surrender. It’s a betrayal (of our faith). I have no other words, said Zen. [Source]

Catholics in China are split between an underground church swearing loyalty to the Vatican and a state-sanctioned church supervised by the Chinese Patriotic Catholic Association (CPCA). Despite the new deal, CPCA and another state-backed Catholic association called the Bishops’ Conference of the Catholic Church in China (BCCCC) issued a statement this week underlying their continued commitment to patriotism and independence. It raises the question of whether the China-Vatican deal can unite the country’s divided Catholic community. From Nectar Gan at South China Morning Post:

The Chinese Patriotic Catholic Association (CPCA) and the Bishops’ Conference of the Catholic Church in China (BCCCC), neither of which is recognised by the Holy See, made the comments in a statement on their shared website.

[…] In Sunday’s statement, an unnamed spokesperson said the Chinese Catholic Church has “a deep love for its motherland” that strives for the “great rejuvenation” of the nation for all Chinese people under the leadership of the party.

“We will uphold the fine tradition of loving the country and the church, the principle of running the church independently, the direction of sinicisation, and the path that suits a socialist society,” it said.

[…] The statement said also that China’s Catholic Church “belongs to the same faith” as Catholic churches all over the world.

“We are willing to carry out friendly exchanges and enhance understanding [with them] on the basis of independence, mutual respect, equality and amity,” it said. [Source]