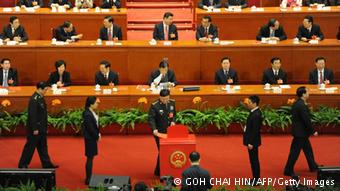 In the latest edition of the Hoover Institution’s China Leadership Monitor, Alice L. Miller examines the run-up to the 19th Party Congress, which she describes as “the most important public event in Chinese leadership politics.” The Congress is expected to bring a sweeping transition in the top leadership, including the replacement of 11 of the 25 Politburo members including five on its Standing Committee, leaving only Xi Jinping and Li Keqiang.

A congress’s three tasks of setting down broad guidelines for the party’s upcoming work, revising the party constitution, and changing the party’s top leadership are fundamentally intertwined. Judgments about the success or shortcomings of party work over the period since the previous party congress affect the standing and prospects of party leaders in power over that time. Administrative and substantive expertise in specific policy areas has become increasingly important for promotion into the top levels of the party— alongside the traditional criteria of political patronage and factional balance of power— and policy departures conveyed in the congress’s political report have thus come to play a significant role in shaping the career prospects of individual leaders. At the same time, policy directions imparted in a congress’s political report reflect in some measure the strength of leaders and their allies who advocate that course over other leaders advocating a different policy course.

For all these reasons, preparations for convocation of a party congress are intensely political, and heat up the political atmosphere in Beijing more than a year ahead of time. Over this period, appointments to high-level posts in the Central Committee departments, in the State Council ministries, among the PLA brass, and in the provinces are made with an eye toward concurrent appointment to the Central Committee. Some appointments— to the post of party chief in provinces such as Shanghai, Beijing, Guangdong, and Tianjin, for example—usually involve consideration for concurrent membership on the Politburo itself.

[…] As the political atmosphere heats up, the shadows of leadership politicking under way in the party’s internal networks may be tantalizingly cast into the open press. At the same time, often-contradictory rumors and speculations circulate among mid- and lower-ranking officials and academics in Beijing and make their way into Hong Kong’s independent China-watching press and into foreign media. All of these factors make the long campaign to convene a CCP congress into an intensely political season. [Source]

One round of the preparatory appointments Miller refers to occurred last weekend, with Xinhua reporting a number of province-level reappointments:

Du Jiahao replaced Xu Shousheng as secretary of the Hunan Provincial Committee of the Communist Party of China (CPC), according to an official statement on Sunday.

Li will no longer be a member of the CPC Yunnan Provincial Committee or its Standing Committee, the statement said, adding there will be a further assignment for Li.

Chen Quanguo will no longer be a member of Tibet’s CPC Committee or its Standing Committee, and will be transferred to another post, the statement said. [Source]

The year leading up to [the 19th Congress] will focus on Xi appointing more new people into major provincial party and government positions, sources with ties to the leadership say.

[…] Both Chen [Hao] and Du worked with Xi when he ran China’s commercial capital, Shanghai, as its Communist Party chief for a year in 2007, according to their resumes.

[…] Xinhua said on Monday that Chen [Quanguo] would move to Xinjiang as its party boss, another unruly part of the country, due to what the government says is a concerted Islamist-backed campaign of violence in a region with a large ethnic minority Muslim population.

The current party boss, Zhang Chunxian, is expected to move to Beijing to take over a senior role in a party building committee that Xi is overseeing as part of his efforts to instil greater discipline in the corruption-racked party, the source added.

Xinhua said Zhang would be given another post, but did not say what. [Source]

South China Morning Post reported that the 63-year-old Zhang is “‘on his way out’” via a “semi-retired” role. Miller noted in her CLM article that Zhang was evidently not present at the top leaders’ recently concluded seaside retreat at Beidaihe. Also absent, she writes, were Guangdong Party chief Hu Chunhua and his Chongqing counterpart Sun Zhengcai, who have been seen as potential successors to Xi Jinping and Li Keqiang. South China Morning Post reported in March that Hu’s prospects appeared to be dimming, and more recent speculation suggests that Guizhou Party chief Chen Min’er and Li Qiang of Jiangsu may be elevated instead.

Leadership transitions often prove unpredictable, as illustrated by frustrated expectations that former Chongqing Party chief Bo Xilai, now imprisoned for life, and his more liberal Guangdong counterpart Wang Yang would rise to the Standing Committee at the 18th Congress in 2012. Things look even more uncertain under Xi Jinping, who has already shattered the traditional immunity granted to former Standing Committee members and may be planning to overturn or subvert conventional leadership term limits. From Choi Chi-yuk at South China Morning Post:

Observers said Chen [Quanguo] would probably secure a place on the next Politburo, but there was still a chance the rules of the game could change on Xi’s watch.

Unlike his predecessors who made it clear who their successors were five years before they handed over power, Xi has offered no clues as to who might succeed him in 2022.

“In this sense, one should not make a conclusion for the time being,” Hong Kong-based veteran China watcher Johnny Lau Yui-siu said.

Beijing-based political analyst Zhang Lifan said it was too early to be sure that Chen would become a Politburo member because the power struggles at the top had not been settled. “In terms of party tradition, changes can emerge at the last minute ,” Zhang said.

[…] Zhang Lifan said it was clear Xi intended to install his picks in the ruling team, even though some of the appointees were not regarded as having the necessary rank or experience. [Source]

By placing loyalists in key party positions, Xi can ensure that he has support when the party congress meets next year. “It is definite that he wants to bring in people he can trust,” Matthias Stepan, head of Domestic Politics Programs at the Mercator Institute for China Studies, told DW.

Stepan added that this type of reshuffling is not unusual for leaders in Xi’s position but that there was a clear timing for the rearrangement of key positions on the provincial level. “This is a clear prelude to a bigger reshuffle of positions in Beijing and the provinces,” said Stepan.

“It is only the tip of the iceberg,” said Stepan. “We will see a larger number of people assuming office as governors or vice-governors in the provinces over the course of the year. At the same time, many high level officials will transfer to positions in Beijing.”

[…] At the party congress in 2017, Xi will have the chance to control the process and exercise influence over new members. According to figures published in The Economist, the number of seats available will be 92, an unusually high figure resulting from members retiring or being removed because of corruption. [Source]

The Economist Intelligence Unit, though, suggested that Xi’s plans may not be on track, and that his “dominance of the political stage might not be as comprehensive as widely assumed.”

Amid all the speculation on political maneuvering, a report from Xinhua on Tuesday emphasized “purely merit-based promotion” throughout the Party:

To eradicate corruption, just hunting “flies” and “tigers” is not enough; it is important to stop the emergence of more to take their place.

As the Communist Party of China (CPC) brings down corrupt petty (flies) and high-ranking (tigers) officials, it is now ready to ensure purely merit-based promotion.

A circular released Monday listed six measures to prevent “sick” officials – those with besmirched records or questionable morals – from being promoted.

[…] “Only long-term observation and analysis can diagnose an official’s ‘sickness’ and the severity of the affliction,” said Xie Chuntao of the CPC Central Committee Party School.

The circular instructs authorities to fully understand an official before considering him or her for promotion. The circular comes as a local Party leadership change once every five years is ongoing across China. Heads of various Party organizations will be held responsible for inappropriate promotions. [Source]

At the beginning of last year, Xi started to talk about how to do a better job of regulating this group, terming it a “critical minority” and saying it was key to the success of the anti-corruption campaign and continuing rule by the party.

He has promised stricter rules to govern the behaviour of those officials who should be politically loyal, law-abiding and clean of corruption.

This is easier said than done because of the nature of the party’s opaque politics, characterised by a lack of transparency and accountability.

[…] There are no clear rules to govern the family members and relatives of the 25 Politburo members including the seven Politburo Standing Committee members.

[…] Coming up with clear and well-defined rules to govern these 25 people and their family members – the most critical of the critical minority – will be one of the biggest tests to face the Chinese leadership. [Source]