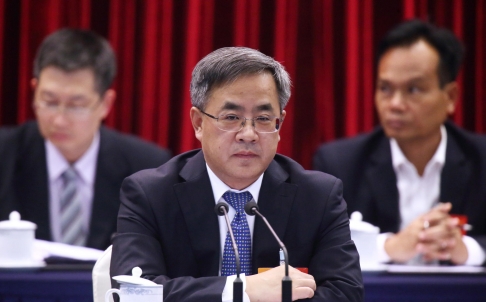 Hu Chunhua—aka “Little Hu,” a reference to similarities between his own career path and that of his mentor, former president Hu Jintao—became a member of the CCP Politburo and the Party chief of Guangdong Province in late 2012. While the leader was once expected to rise to the Politburo Standing Committee in 2017, a report from the South China Morning Post suggests that is now only a remote possibility:

“There were considerations as to when Hu would return to Beijing as a Politburo Standing Committee member … but the prospect no longer looks so rosy,” Guangzhou Academy of Social Sciences researcher Dr Peng Peng said.

“When Hu was Hebei governor, there was the melamine-tainted milk powder scandal. When he was Inner Mongolia party boss, there were mass demonstrations and environmental pollution.”

[…] He also has little room to experiment in deepening economic reform due to a downturn. Guangdong reported a grim outlook this year as gross domestic product grew just 7.8 per cent last year, falling short of the 8.5 per cent target. [Source]