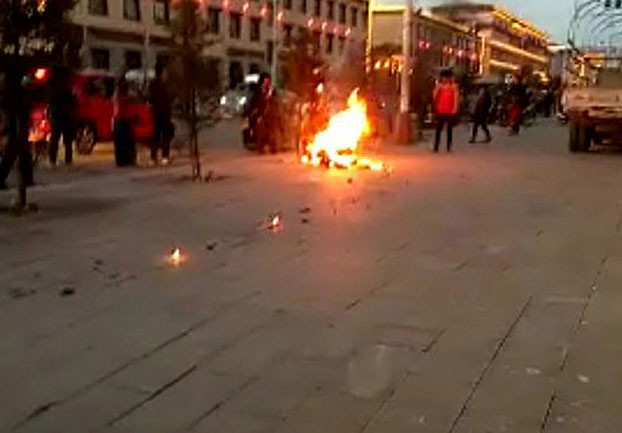 A Tibetan man died after self-immolating in a historically Tibetan region of Gansu Province, bringing the number of Tibetans to self-immolate in protest of Beijing’s policies to 146 since 2009, 125 of whom have died. The AP reported on the incident yesterday, citing Radio Free Asia:

A Tibetan man has set himself on fire in western China in what appears to be the latest such radical protest against Beijing’s rule, a US government-backed radio station and a rights monitoring group report.

The unidentified man set himself alight on a road outside the town of Machu in a traditionally Tibetan area of Gansu province at around 7pm on Thursday, Radio Free Asia and London-based Free Tibet reported.

[…] Thursday’s self-immolation was the first known to have occurred since either March or May. [Source]

A follow up from Radio Free Asia reports that the man has died of his injuries, that he was a husband and father of three, and that according to eyewitnesses he carried out his self-immolation as an act of political protest:

Tashi Rabten, 33, set himself ablaze on Dec. 8 at about 7:00 p.m. local time on a road leading from the Machu (in Chinese, Maqu) county center to the Machu Bridge, local sources said following the protest.

[…] Speaking on condition of anonymity, a Tibetan living in the area told RFA on Friday that witnesses to the protest heard Rabten “call out for freedom for Tibet and for the return of [exiled spiritual leader] the Dalai Lama.”

“He also called out for the release of the [detained] Panchen Lama, Gendun Choekyi Nyima,” RFA’s source said.

[…] “[Police dispatched to Rabten’s home] demanded that his family should say that the self-immolation had no connection with Chinese government policies, and had been carried out instead because of problems at home,” the source said.

Rabten’s wife and a 15-year-old daughter were then taken away by police, he said. [Source]

On December 8, London-based NGO Free Tibet posted graphic footage alleged to be Tashi Rabten (whose identity had not yet been confirmed) burning by the roadside in Machu. An update from Free Tibet reports that a candlelight vigil for Tashi Rabten was held in Dharamsala, the base of the exiled Central Tibetan Administration, and provides a comment from the NGO’s director:

“Having lost a father and a husband, Tashi Rabten’s family now find themselves in detention. The cruelty of this system knows no bounds. The only crime they have committed is to be the family of someone who has embarrassed China by once again reminding the world that their occupation and these human rights abuses cause Tibetans real pain. And sometimes this pain pushes Tibetans to make the ultimate sacrifice.”

“Instead of trying to bury this news or blaming and punishing the family, China should tackle the root causes of these self-immolations. It should remove its suffocating restrictions on Tibet, end the human rights violations it carries out on a daily basis and put an end to the systematic eradication of Tibet’s culture. The international community must also join this effort by calling on China to halt these abuses. World leaders cannot simply stand by while more Tibetan lives are lost.” [Source]

The update also notes that Tashi Rabten is the cousin of Tsering Kyi, a 20-year-old student who died after self-immolating in March of 2012.

In the wake of the first self-immolation to be reported in months, Tibet scholars Carole McGranahan and Tricia Kehoe share some essential resources on Twitter:

Adding this interview w/Thierry Dodin to @CMcGranahan's suggested list of readings on self-immolation in Tibet https://t.co/gmg6vBxgUr

And also this important podcast from earlier this year w/Charlene Makley on Tibetan self-Immolation protests https://t.co/LMKt0B8nR6

Self-immolation is v.risky for Tibetans to discuss openly, but forms of grieving are always evident on days like this on Weibo, Wechat etc.

Also on Twitter, Tibet scholar Robert Barnett said: “Another tragic self-immolation by a Tibetan in support of the Dalai Lama, who needs to ask Tibetans not to do this.” The Dalai Lama has been consistently reticent on Tibetan self-immolations, saying in 2012: “This is a very, very delicate political issue. Now, the reality is that if I say something positive, then the Chinese immediately blame me. If I say something negative, then the family members of those people feel very sad.”