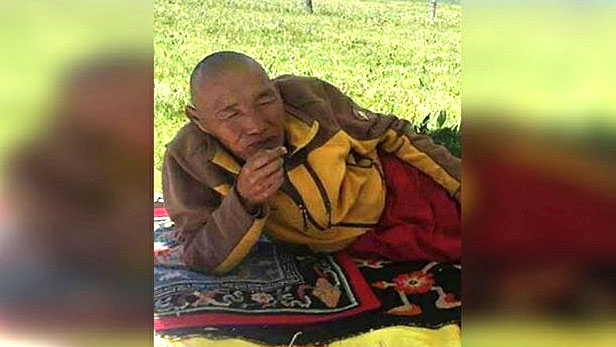 Citing Tibetan sources, Radio Free Asia reports that a 63-year-old Tibetan monk named Tenga has died after self-immolation in the Tibetan region of Kardze (Ganzi in Chinese) in Sichuan Province on Sunday. RFA claims that a communication crackdown in the region kept the news from getting out earlier. Tenga becomes the 151st Tibetan to self-immolate in protest of Chinese policies in Tibetan regions of China since 2009.

While burning, Tenga called out for freedom for Tibet, a second source said, speaking on condition of anonymity from inside Tibet.

“Security officers and armed police quickly arrived at the scene and took his body away,” the source said.

“Afterward, there was a heavy security clampdown in the area, with family members in Dando village placed under watch by Chinese police.”

“With police now stationed around his house, and phone calls not getting through, it is difficult to assess the current situation,” he said.

“Police have not returned [Tenga’s] body to his family yet,” a third source said, also speaking on condition he not be named.

News of Tenga’s fiery protest on Sunday was briefly delayed in reaching outside media contacts due to communications clampdowns imposed by Chinese authorities in the Kardze area. […] [Source]

In May, a 16-year-old student died after self-immolating in Kardze, and weeks later a 22-year-old monk died after a similar act of protest in a Tibetan region of Qinghai.

Chinese authorities strictly manage domestic media coverage and limit foreign journalists’ access to conflict-prone ethnic minority regions like Tibet and Xinjiang, resulting in a lack of domestic coverage of protest and violent incidents. The reinforced media controls also lead to sparse international coverage, which is usually led by foreign-funded organizations and advocacy groups such as Radio Free Asia or Free Tibet, who also reported on Tenga’s death, providing more details on the monk. Free Tibet’s coverage also noted a lack of certainty over whether Tenga died:

Security personnel soon arrived on the scene to take Tenga’s body away. It is not clear at this point whether or not Tenga survived his protest. Free Tibet’s research partner, Tibet Watch, is currently working to confirm these details.

[…] Tenga formerly lived and practiced in Kardze Monastery before health problems forced him to leave. Since then he has been living at his home in Dhadho Village, where he conducted prayer teachings for local Tibetans, who gave him the honorary title Gen Tenga, meaning “teacher”. He was said to have followed global and Tibetan affairs with keen interest. [Source]