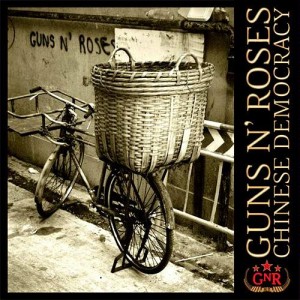 Guns N’ Roses long-awaited new album, titled “Chinese Democracy” is banned in China, and falls in line with other foreign artists that have come up against the CCP’s censorship. David Flumenbaum from the Huffington Post writes:

According to a Wall Street Journal report Sunday, Chinese authorities have outlawed sales of the new GN’R release, citing the title of the album, “Chinese Democracy,” as the principal reason. The title, thought up by Guns N’ Roses frontman Axl Rose because he “liked the sound of it,” violates rules established by China’s Ministry of Culture that prohibit the word “democracy” to be used in the title of any music, book or film within mainland China. One can only assume that if the word “Chinese” precedes “Democracy” in a title, Chinese censors would become even more frightened.

The Global Times, a newspaper run by China’s Communist Party, published an article Monday with the headline “American band releases album venomously attacking China,” that labels the album part of a Western plot to “grasp and control the world using democracy as a pawn” and that the album “turns its spear point on China.” Other than the story in the state newspaper, no Ministry of Culture spokesman has commented on the album.

Stores in China that carry new albums will not be allowed to offer Chinese Democracy and fans expect that they will be forbidden to purchase the album on iTunes. China’s biggest internet portal, Baidu.com has blocked all internet searches for “Chinese Democracy” and access to the website ChineseDemocracy.com has been blocked within mainland China, according to an AFP report Monday. However, Axl’s new album was not completely unobtainable for Chinese GN’R fans. Sunday, Internet users there were able to listen to the album’s 14 tracks on MySpace, which was granted permission to release the songs on the Internet one day before Monday’s wide release. Furthermore, a search for “Chinese Democracy” on both Google and YouTube within Mainland China returned search results for the new album, according to a source in Shanghai.

Music, particularly rock n’ roll, has a history of subversion within culture. The Wall Street Journal details how Guns N’ Roses have influenced the Chinese rock scene as well as how music fans are getting around the ban:

For fans, the response is more complicated. GN’R developed a major following in China in the late 1980s, when the young Mr. Rose was recording early hit songs like “Welcome to the Jungle.” China was in the throes of its own rebellious era, and heavy metal was its protest music. GN’R’s popularity soared in the wake of the 1989 Tiananmen Square crackdown on pro-democracy demonstrators. Learning the band’s 1991 ballad “Don’t Cry” was a rite of passage for a generation of Chinese guitarists…GN’R nostalgia remains strong. A program on state-run China Central Television last year ranked “Qiang Hua” (literally, “Guns Flowers”), as the group is known in Chinese, at No. 8 on a list of top rock bands of all time.

Chinese fans eager for news on the Web about the new album sidestep censors by using coded language. Many deliberately scramble the name, typing “Chinese Democraxy” or “Chi Dem.” They say they fear that typing the Chinese characters for the title will draw government scrutiny. Still, it’s not much challenge to find news about the record on the Web, where even the site www.chinesedemocracy.com is a discussion of GN’R, not politics.

Some Chinese artists, loath to be branded as democracy campaigners, declined valuable offers to help illustrate the album. “I listened to their music when I was little,” says Beijing visual artist Chen Zhuo . He was “very glad” when GN’R asked to buy rights to use his picture of Tiananmen Square rendered as an amusement park — with Mao Zedong’s head near a roller coaster. Then, Mr. Chen looked at lyrics of the album’s title song and, after consulting with his lawyer and partner, declined the band’s $18,000 offer. “We have to take political risks into account as artists in China,” says the 30-year-old.