Chinese Nationalism and Its Impact on Brands

A recent study by Ogilvy Group China & Millward Brown ACSR China looks at Chinese nationalism from the angle of consumer culture. The research based its data on events leading up to the Beijing Olympics in 2008 and the role of the internet in cultivating nationalistic sentiment. Media reports:

The research, which canvassed a total of 900 Chinese citizens aged 16 to 45, found that the web had been the most significant source of awareness of the recent hostility towards foreign companies such as Carrefour and CNN. The findings showed that the gap between awareness of and participation in an event was narrowed online, with almost two-thirds of respondents stating they had taken part in the nationalistic ‘I heart China’ campaign on MSN at the time of the furore.

In times of nationalistic fervour, Chinese brands were likely to see an increase in purchase intent among consumers, the survey suggested. A section of the participants, when reminded of the recent nationalistic activities and asked which brands they were likely to purchase in the near future, showed less interest in Carrefour and Louis Vuitton (respectively 7 and 8 per cent less than their counterparts not caught up in the situation). Meanwhile, Chinese skincare brands such as T-Joy and Dabao became more appealing by 7 and 8 per cent, respectively.

But while Chinese consumers appear to favour Chinese products in principle (84 per cent vowed to increase their consumption of domestic brands), the survey showed quality and price to be the most important factors in a purchase decision, above national origin. Particularly for higher-priced goods, foreign brands were shown to be preferred. Knowledge of the origins of certain brands also appeared to be shaky: 26 per cent believed Olay to be Chinese.

CDT had an earlier post on how brands have tried to use nationalism in their favor.

Conversely, that can also backfire. In Adidas’s case of using the national flag on their products, resulted in a recall of products after a protest in March of this year. From Forbes:

Chinese reporters and consumers rose to the defense of its national flag shortly after a news report last week in Hong Kong’s Mingpao daily newspaper, saying that Adidas might have violated Chinese law, which forbids the commercial use of its national flag. The news prompted a search by reporters in China, from Shanghai to Shenzhen to western Chengdu city to see if they could find the offending merchandise on sale in China as well, only to confirm it was not, yet. But one reporter managed to confirm with Adidas’s outlet in Chengdu that the apparel and accessories had been planned for sale there in April. 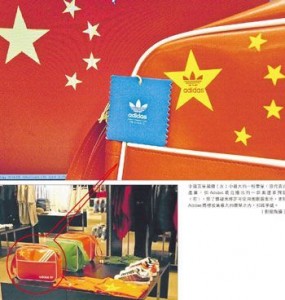 Read more on the Olympic publicity on CDT.

The entire research report can be viewed on WPP.

See also perspectives on Design News and a summary on Golden Brands China.