Lian Yue: Keep the Pessimism In Your Heart 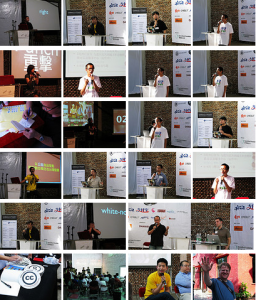 Lian Yue, a well-known social critic and blogger, attended the fourth Chinese Bloggers Conference in Guangzhou this year. The following are excerpts from the talk he gave during the conference, translated by Lucy Lin:

… I think the themes presented in today’s forum in the “Southern Metropolis Daily” on the creation, changes and transformation of a citizen society is very close-fitting to the agenda of our Annual Bloggers Conference. I feel that blogs are used for such purposes as well, so today in the afternoon when a lot of people asked questions, one person replied, “I am pessimistic.” What he meant by that is, “All that I have said and done and what others have done is useless.” At that time, the topic I was discussing was that it’s immoral for us to say that we’re pessimistic at the present stage; however, if you are a pessimist, you must keep it in your heart. To build a citizen society, the stage we are in right now is really very nascent. We only have a few blogs interlinked with each other trying to promote social progress. This effort seems so young, nonsensical, and far-fetched. In these moments, are you going to discourage him and set him back? Or are you going to tell him that his blogging is useless? If you say that this website is useless, then how will it even develop? The sprouts of citizen society will then be entangled. So at this time, I believe that at the present stage in China, a pessimistic outlook is immoral. (Audience applause)

Why should we write blogs? Why should we participate in this Annual Bloggers Conference? Why should everyone convene to communicate? This shows that we believe in ourselves, and we believe that we can change this society. If we can believe in ourselves, then we must also believe in others. I do not believe anyone present today is more brilliant than another. The skills that other people have are not weaker than ours, not by one bit. How many of the actions or words of the approximately one hundred people at this Annual Bloggers Conference are going to change this society? Truthfully speaking, there’s a possibility that this society cannot ever change. However, what use does a citizen society have then? Its use is that everyone is a seed in society. You have to pretend like you’re a seed, and perhaps a year later, each person can influence forty other people, and another year later, each person can influence ten thousand people. Society will change when this happens.

…:I used to frequently say that China is hopeless; I would say China is hopeless, and whatever we do is useless. Before 2007, I would say such things, but after 2007, I realized that I cannot say these kinds of words again. We can never say these kinds of words. We need to always encourage those in action and never set them back. …I am actually naturally a pessimistic person, but I should leave pessimism in my heart, never express those sentiments, and just let those sentiments become a memory.

Secondly, how should we prevent ourselves from becoming mad and delusional after persecution? (Applause) In other words, maybe those of you who are present today have experienced persecution to some extent. How should we maintain a normal mentality and normal state of mind when we are under persecution? This is also something that I have thought through last year.

Last year, whenever I picked up my phone, I would panic and worry whether someone was listening into my phone conversations. I kept on thinking about this problem at that, and after much thought, I reached an epiphany. If the power knows that someone is constantly criticizing and denying it, then it’s be abnormal for it not to utilize such surveillance methods. Since this is a method that is beyond my control, I will just say what I want to say on the phone, and I won’t let it affect my life. I will continue to banter with my wife on the phone as if these people do not exist.

The following are video clips from his talk: