China’s ‘Netizens’ Take On the Government

A photograph of an official from the land bureau of Nanjing, the capital of Jiangsu province, came under scrutiny in December after it began circulating on the Internet. Netizens pointed out that Zhou Jiugeng’s imported $25,000 watch and luxury cigarettes were of a quality far exceeding what he could afford on an official’s salary. He was later dismissed.

In a country where the media fall under tight government supervision, freelance Web investigations help fill a watchdog role the press usually cannot. Web exposés are “a general phenomenon on the Internet anywhere,” says Xiao. “What’s new in China is that because of the lack of freedom of information, the lack of free speech for ordinary citizens, ‘click-to-kill’ is particularly focused on otherwise unaccountable officials. That is unique.”

This week, in an apparent attempt to block further online manhunts, the city of Xuzhou in Jiangsu province banned the posting of private information about government officials. But authorities may find that those who post such information don’t so easily follow orders. “This a metaphor for what the Internet is doing in China,” says Xiao. “It is precisely the very [Internet] controllers themselves now being harmed.” 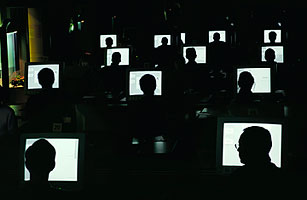