Authorities have now acknowledged that the devastating fire at the CCTV complex in Beijing, which killed one firefighter and injured several others, was caused by an illegal fireworks display set off by CCTV itself. The broadcaster has issued a statement of apology. From AP:

CCTV said it was deeply grieved “for the severe damage the fire caused to the country’s property.”

“According to the Beijing fire department, this fire occurred because the person in charge of the construction of the new building project of CCTV, without permission, hired staff to set off fireworks that violated regulations,” the broadcaster said in a statement on its Web site.

The fireworks used were classified as grade “A,” making them powerful and dangerous enough that a special permit was needed to set them off downtown.

However, the display’s organizers did not obtain such permits and ignored police warnings, CCTV said. Because the building was still under construction, fire fighting systems were not yet functioning, it said.

Meanwhile, Chinese netizens are busy finding humor in an otherwise tragic situation and spreading Photoshopped images, mostly at CCTV’s expense. While many netizens have expressed their sorrow for the losses in the fire, including the firefighter’s death, a large number of commentaries and spoofs (often using the trendy image of “Grass Mud Horse“) also reflect netizens’ common critical view of CCTV as a powerful propaganda machine. Some of the sharper and more critical posts are quickly being deleted, but many humorous images and cartoons are being widely spread. Many images and cartoons are here, here and here. 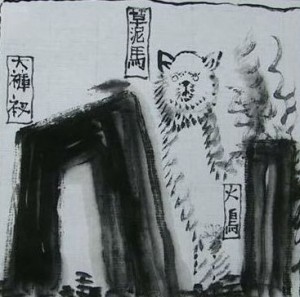 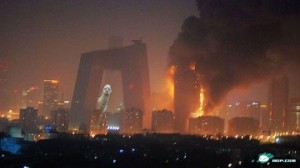 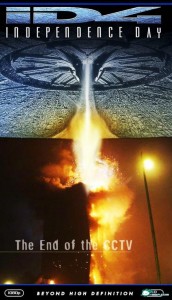 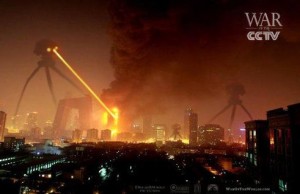 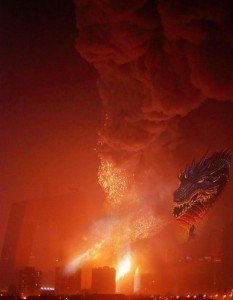 Han Han, China’s most popular young writer and leading blogger had an immediate comment on his blog when he heard about the fire, in his typical witty, sarcastic style (the post has already been censored, but is still being reposted by many of his fellow bloggers):

“It’s said that the building had not been put into service when the fire took place, which was a fortunate thing in this disaster. I hope nobody got injured or killed in this accident. …… As for CCTV, this is so hard to imagine, such a always truth-speaking media, how could it be hit by such a tragic event? The gods must have been blind.”

The full translation of Han Han’s censored text is here. 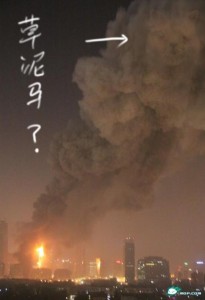 Update: See also a post from the Time China blog and “China’s CCTV network gets little sympathy after hotel fire” from the Los Angeles Times:

Even before it was revealed Tuesday that an unauthorized fireworks display organized by China Central Television caused the spectacular fire that destroyed one of Beijing’s new glass-and-steel landmarks, the state-run broadcaster was already the subject of its own firestorm on the Internet.

The inferno at CCTV’s new, still-unoccupied headquarters complex laid bare simmering anger and resentment toward the network both for spending public money on grand construction projects and for continuing to broadcast government propaganda.

“As long as there aren’t any injuries, let it burn. They don’t need so many buildings [in]the first place,” wrote one typical anonymous poster at the popular news portal Sohu.com. “CCTV enjoys too much luxury already. They will always have enough buildings, even though this building is down.” 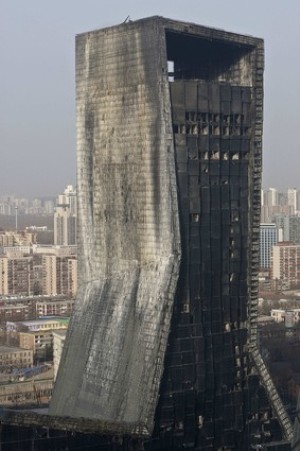