Photos: Newspaper Peddlers on the Streets of Changsha

Below are photos of school-aged children peddling newspapers on the streets of Changsha, capital city of Hunan Province. The photos were taken from rednet.cn, which also supplied the captions and commentary, translated by CDT. 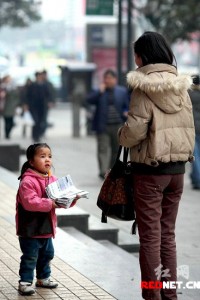 Before buying a paper, a kind-hearted auntie asks about the papergirl’s situation. 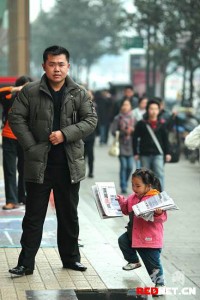 The papergirl rushes up as soon as she sees the man show an interest in buying. 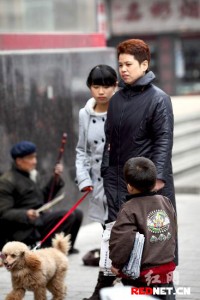 Just ahead of an old street performer, a young boy peddles newspapers. 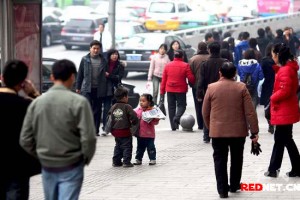 The papergirl protests the paperboy’s invasion of her “business territory.” 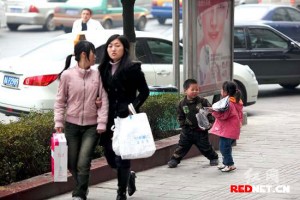 The “invading paperboy” dodges her left and right, smiling the whole while. 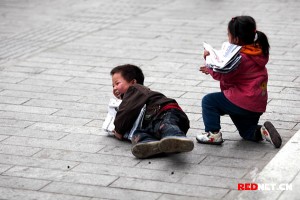 The “business territory invasion incident” finally ends with the paperboy getting knocked over by the papergirl.

Before the 2009 Spring Festival, passersby at a Changsha plaza could see a number of school-aged kids peddling newspapers in the cold, amidst crowds of people. Some of the passersby showed disdain for the children, complaining that they obstructed traffic. Others took pity on the kids and said that they deserved sympathy and an outstretched hand. Still others wanted to look more deeply into the matter before deciding whether or not to help.

According to this reporter, these kids may look unkempt, but they haven’t lost a bit of their innocence. Just as they can be competitors amongst each other, they can also be one another’s playmates!

Hecaitou, one of China’s most prominent bloggers, posted these pictures on his blog. The pictures and commentary elicited a number of reactions from his readers, selectively translated by CDT:

祖国繁荣昌盛，人民幸福安康，哦也～
O glorious motherland! How our people are blessed and in good health!

如果他们手中的是《环球屎爆》…..
If they’re holding a 《Global Shit Explosion》 [this is a pun on the name “Global Times,” whose Chinese name 环球时报 huan2qiu2shi2bao4 sounds like 环球屎爆 huan2qiu2shi3bao4] …..

童工，小孩子真可怜，有钱人的小孩在家被呵护着，他们却这么小就要招人白眼，唉
Child labor. I really pity these kids. While well-off kids are being nurtured at home, these kids invite the evil glares of others.

挺和谐的，祖国的花朵~~
Ah, quite harmonious, flowers of the homeland~~

鉴定为真，但可能不是卖报。在地铁里有免费报纸发放，每天上班时间看地铁出口总有几个穿着很不讲究的中年妇女收乘客看完的报纸，有的还背着孩子。
再过几年等她们怀里或背上的孩子长这么大了，大概每天也干同样的事。这叫做“贫困世袭化”（顺口溜中“四化”之一）
This needs verification. Maybe they’re not selling papers. In the subway stations, there are free newspaper giveouts, and everyday during work hours, I always see middle-aged women in shabby clothes collecting papers that passengers have finished reading. Some of these women are carrying children on their backs. After a few years, maybe those children grow to be about this age, and then they probably have to do the same thing as their moms everyday. This is “the process by which poverty is inherited” (sounds like one of the Four Modernizations).

都几乎可以作为教科书图片描写万恶的、赤裸裸的旧社会了。
These are all pretty much textbook examples of extreme evil, laying bare our old society.

@gravity0
我的天哪。你还说是鉴定……你以为中国处处是上海啊。处处是北京啊。这么牛逼。
长沙有地铁？？？？ 你以为是北京啊。
看来现在的国人已经到了“何不食肉粥”的地步了。
Oh my gosh. You’re saying you want proof …. you think everywhere in China is like Shanghai? That everywhere is like Beijing? How awesome.
Changsha has subways???? And you thought it was like Beijing.
Seems like Chinese people have already gotten to the level of “let them eat meat porridge” [similar to the saying “let them eat cake”].

长沙是我老家
在黄兴路（最繁华的步行街，看图片也像是那）确实有这些小孩子在卖报
一般是潇湘晨报 五毛钱一份
Changsha is my hometown.
On Huangxing Road (the busiest road, the street in the photo is similar to it), there are indeed young kids selling papers.
Typically, it’s Xiaoxiang Morning Post on sale for 5 mao a piece.

不管怎么说，报道很温馨。
还有那个小男孩的笑容，感谢记者记录了下来，在他还纯真的时候。
However you see it, this report was heartwarming.
That young boy is still smiling. Thanks to the reporter who recorded this boy’s pure innocence.

背后由人控制的，可悲。
一个翻版的贫民窟百万富翁
Behind, there’s someone controlling them. How pitiable.
A slum millionaire in the background.

这种情况一般还是存在的，估计幕后有父母暗箱操作的吧～～
This kind of situation still exists. I reckon that the parents are orchestrating this behind-the-scenes.

你看看那个记者的口吻
好像这是多欢欣鼓舞的事情一样
偶擦
Look at what the journalist is saying.
He’s writing as if this is some great occasion for joy.

这个记者的评论果然强大，“一起玩乐的小伙伴”。他（她）舍得让自己的孩子来跟报童们那样玩乐吗？
This reporter’s commentary is really something, “be one another’s playmates.” Would he (she?) be willing to let his own kids play with the ones selling papers?