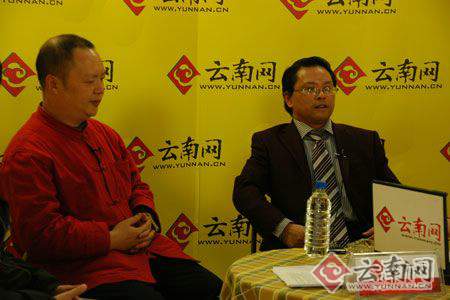 Here is an interesting update to the story, Eluding the Cat: Yunnan Government Asks Netizens to Help Investigate Detainee Death. At 3 pm on February 22nd, Wu Hao (伍皓), the deputy director of the Propaganda Department of the Party Committee of Yunnan Province went online to have an interactive chat with netizens concerned about the “Eluding the Cat” event. Here are some excerpts from Wu Hao’s responses, translated by CDT:

Wu Hao: When we handled such public opinion events in the past, we mostly took a conventional approach. We had the following options:

First, we could use the strategy of “delaying.” Many people feel that netizens’ voices are not clearly focused. So a delaying strategy can be adopted to deal with netizens’ opinions. When they encounter a new hot news item, their attention will quickly shift. This is one strategy.

Second, blocking. The propaganda department still has the power to direct the media. We can order the media to not report or comment on it.

Third, deleting. We can delete all inconvenient, or negative, online posts one by one. This is also one strategy.

Four, waiting. In this case, this is the best strategy, since this is a legal case. We can just take our time and wait for the judicial department’s investigation to go through all the legal procedures. It will take a very long time to complete this case, and by that time the public’s right to know will still not be fulfilled.

Mr. Wu Hao went on to claim that the Yunnan Party Propaganda Department decided to go for an open, transparent approach this time, as opposed to all the “conventional approaches” used in the past. The full text transcript is posted in many official Chinese news websites, including xinhua.net.

Update 1: While Mr. Wu Hao, a young former Xinhua reporter who was recently appointed to the Propaganda Department, indeed took an unprecedented approach, inviting netizens to help investigate the detainee death, this move also generated a huge controversy among netizens. Mr. Wu Hao selected “netizen” Fengzhimoduan (风之末端) and Bianmin (边民) as two leaders of a “netizen representative team.” However, an online search by other netizens revealed that both of the “netizen representatives” are actually working members of the official media as well as active online commentators. After other members of the netizen representative group raised questions over the qualifications of the two lead representatives, Mr. Wu Hao even confirmed with the head of the Yunnan Internet Monitoring and Surveillance Department that both Fengzhimoduan and Bianmin had a history of receiving payment from the department for writing “commentary pieces at the time of public opinion crisis.” In other words, this “netizen investigative team” Wu Hao organized is actually led by two members of the “fifty-cents party,” as Chinese netizens put it. Records of the conversations and appointments in this case have been recorded online, reported by Guangzhou based Southern Metropolis News and widely published in the official media.

The Shanxi-based Chinese Commercial Daily (华商报) also reported that Fengzhimoduan (风之末端) had received fees for writing articles for the Yunnan Propaganda Department in 2008.

The whole “Netizens Investigative Team” published a report after their visit to the prison site and admitted that they did not get access to any substantial information about the case. “They [local authority] denied us in the name of law and institutional procedures,” the report said.

That’s right. It’s about an intelligent, 38 year-old former Xinhua News Agency reporter who is rising rapidly through the ranks of China’s propaganda apparatus. It’s about the fresh new face of Chinese propaganda controls in the information age. 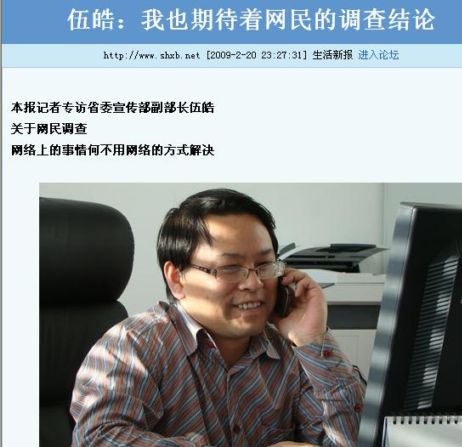 And “Human Flesh Search On ‘Eluding The Cat’ Investigative Team Members” from ESWN, a translation of a Southern Metropolis Daily report about the netizen representatives.