Chinese Bidder of Looted Sculptures Refuses to Pay, With Netizens’ Reactions and Photos

Last week, two bronze heads formerly located at the Old Summer Palace (Yuanmingyuan) were sold at a Christie’s auction in Paris. Though the auction came under much heat, with many Chinese contending that the bronzes were stolen property, the controversy was thought to have come to a close with a final bid by anonymous telephone callers. 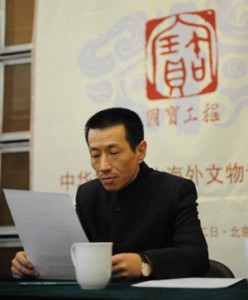 In the latest twist to the bronzes saga, bidder Cai Mingchao (蔡铭超), a collection advisor of National Treasure Funds of China, has come forward to state that he has no intention of paying for the bronze heads. From Xinhua:

“What I want to stress is that this money cannot be paid,” Cai said at the press conference.

An unnamed officer with NTFC said Cai successfully registered as an individual bidder on the day of the auction at Christie’s because of his good reputation. Usually, bidders are required to register several days before an auction.

“Every Chinese would have liked to do like this at that moment, and I’m honored to have the chance to make the bid,” he said.

[…]”The fund faces great pressure and risks by bidding for the two sculptures, but this is an extraordinary method taken in an extraordinary situation, which successfully stopped the auction,” Niu [deputy director to the fund] said. 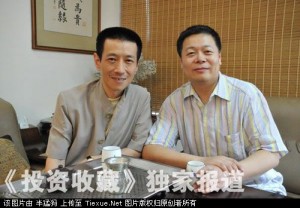 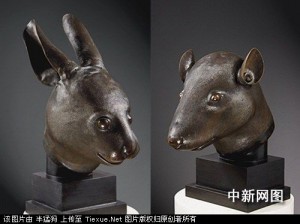 Sofa [Internet slang for “first poster”]? I really thought someone had paid too much money and that it wasn’t worth it since it was originally ours!
沙发吗？我真觉得花了这么多钱，不值，这本是咱们自己的东西！

I support this. This man’s no fool!
支持，他又不是傻瓜

Chinese people ought to be like this!!! Totally support!!!
是中国人都应这样的！！！支持！！！

He should pay the penalty for this breach of contact!!!
违约金还是负得起的！！！

结果法国人也被中国人结结实实的忽悠了一次，咱们组团去忽悠他们！！！
The result is that French people have been hoodwinked by Chinese! Together, we bamboozled them!!!

If he didn’t pay for it, won’t it be hard to get the bronzes?
没付款东西拿到了难道 ？

Of course he’s not going to get them now. But he placed a bid on them, decided not to pay, and now only has to pay a little penalty fine. This sort of thing happens a lot, so much so that it’ll cause the price of the bronze heads to inflate. And bubbles, once they overexpand, naturally burst …
当然拿不到啦，但拍下来，不付款，给点违约金罢了…这样的行为多几次，足以让兽首价格变成泡沫，泡沫嘛，撑大了了自然会爆…

I felt that foreigners shouldn’t be allowed to take away things like that. Now, Chinese people have money and some of them can buy very expensive things. I support my rich countrymen who express their patriotism like this; us poor people can only use our mouths to express our patriotism.
感觉不会让外国人买走，毕竟现在中国人在世界上也算是有钱人，再贵的东西，中国也照样有人买得起。支持有钱的国人用这样的行动来爱国，我们这些穷人只能用嘴爱国了。

Hey, they’re still not back. We need to think of a way to bring them back.
还是没拿回来啊。得想法子拿回来。

If you participated in this act, that’s tantamount to denying the legality of selling the bronzes.

But even if you participated, you have qualify your approval.

You’re not paying the for the sculptures, but you’re still paying the penalty fine.

A few million in penalty fines for this person isn’t a small thing, is it?

Doing this may have come out of a sincere heart, but I think that this action should have been accompanied by some careful forethought.
你不参与这个活动 就等于中国人不承认这个活动的合法性

Cai Mingchao, in his own words, in this news video (Chinese):

For initial reactions to the sale of the bronzes, see chinaSMACK for more.