Qin Gang (秦刚): What Can and Cannot be Watched Online 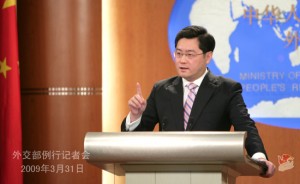 The following excerpt is from remarks by Chinese Ministry of Foreign Affairs spokesperson Qin Gang (秦刚) during a press conference on March 31, 2009, and is being widely commented on by Chinese netizens:

Question: YouTube was blocked at one point last week and was available again from China, and now it seems to be blocked again. There are speculations that it links to the release of video from the “Tibetan Government in Exile”. Do you have any comment on that? Is there any particular offensive material on YouTube right now that causes it to be blocked again?

[The translation above appeared on the Foreign Ministry website. However, CDT re-translated the last sentence to be closer to the original Chinese]