BEIJING: Nearly half of the clothing and a third of the furniture made for children in China’s top manufacturing province is unsafe, with many products containing harmful chemicals, state media said on Thursday.

The discovery was made in an official investigation by authorities in the southern province of Guangdong, the centre of China’s manufactured export industry, the China Daily reported.

It said just 53.5 percent of garments surveyed met safety standards, with many containing excess amounts of formaldehyde… As for children’s furniture, 67.7 percent of it was deemed safe, with some of the questionable products containing too much formaldehyde or health-endangering heavy metals including lead, cadmium and chromium.

The original report in the China Daily:

Lin Ruixi, administration press officer, said problems with the garments included false information about raw materials, poor color fastness and excessive content of the chemical formaldehyde… Parents said they were concerned by the results of the tests and called on the government to make more regular quality inspections.

“It’s unbelievable that half of my daughter’s clothes are potentially unsafe,” Lu Junhua, father of a six-year old girl in Guangzhou, said. 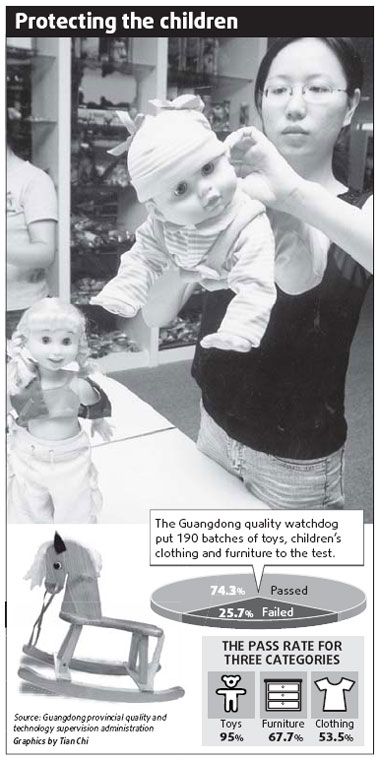