It was recently discovered that medicine capsules had been manufactured with toxic materials made from scrap leather. Twenty-two people have been detained so far in this latest product safety scandal. On Sina Weibo, a netizen posted a photo of the Director of the State Food and Drug Administration, Yin Li, calling on him to resign. As of 9:34 on April 19, that single post had already been reposted more than 230,000 times. The original post read:

@GalenJiang: Director of State Food and Drug Administration, please resign, due to the fact that so many poisoned capsules were on the market for so long. If you do not resign, we will repost your photo. Resign Mr. Director, and take responsibility for your crime. 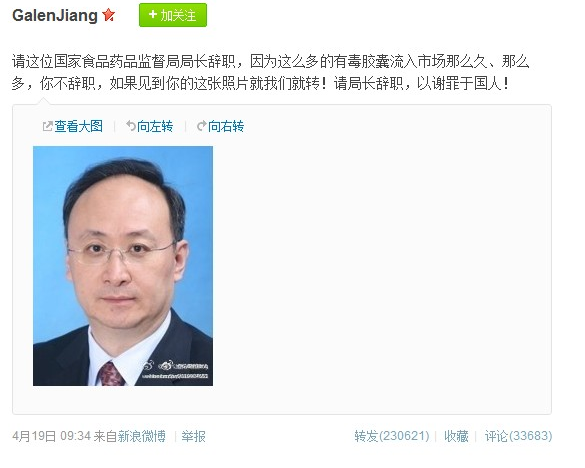 [Update: The original tweet has been deleted on Sina Weibo.]

The former Director of the State Food and Drug Administration, Zheng Xiaoyu, was executed in 2007 for corruption.