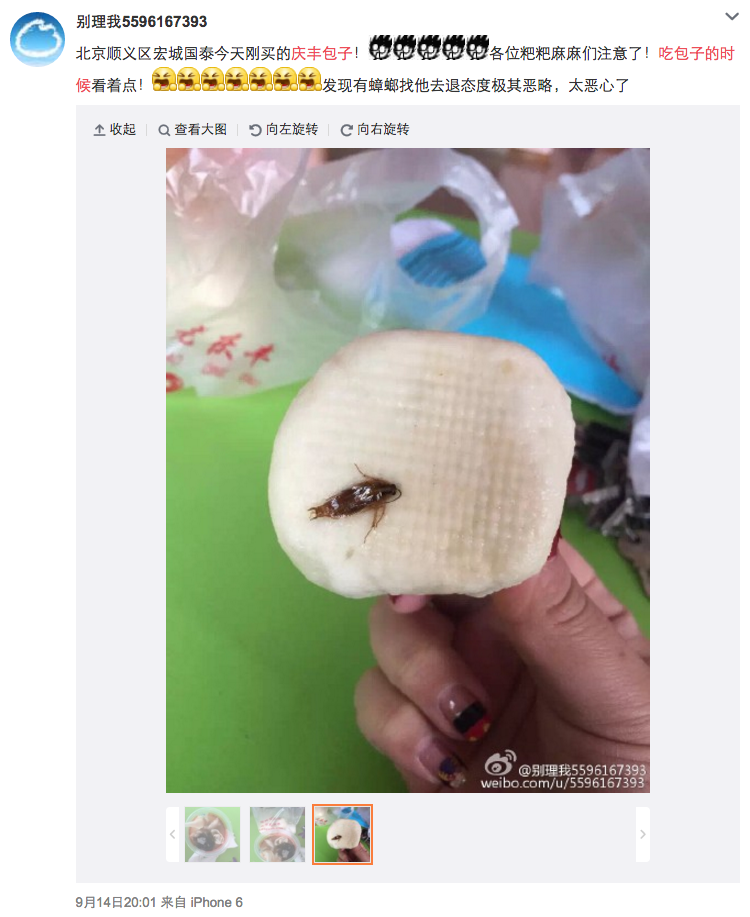 In December 2013, Xi Jinping launched an ongoing presidential image-crafting campaign at a Qingfeng Steamed Bun franchise in Beijing, where he ate alongside a dining room full of surprised patrons. Photographic evidence of Xi’s visit to the modest fast food outlet came in the form of a (possibly strategic) post to Weibo, and netizens took to the popular microblogging platform to speculate on what the president’s order might say about his politics. Xi’s steamed bun lunch won the fast food chain much free publicity, attracted marginalized petitioners to the limelight, and also earned the president the nickname “Steamed Bun Xi” (Xí Bāozi 习包子)—which itself has inspired the coinage of politically significant spin-off Internet terms. @Danger_kid: At the Qingfeng Steamed Bun shop near Dahui Temple, I poured what I thought to be the dregs of vinegar, and out came some aphids. This picture shows what came out on my second pour. The first the little dish was filled to the brim. (October 15, 2015) [Chinese] Formal Chinese news picked up the story, coverage from Youth.cn notes that the two shops have temporarily suspended business, and that all of the chain’s Beijing restaurants will be undergroing third-party safety inspections. Replying to the news coverage, netizen Tongzhanzhuanyuan (@统战专员) commented on Xi Jinping’s ongoing Party corruption purge, “Aha, so the highest of steamed buns is also corrupt.” Fellow Weibo user Taikongbaoleiziyouhao (@太空堡垒自由号) jokingly suggested this could be a reactionary plot, “This is a case of counter-revolutionary entrapment. Don’t cry Qingfeng, stand your ground.” Likewise, Weibo user Tingyuloushangtingyuren (@听雨楼上听雨人) resorted to blaming a common government scapegoat: “Hostile forces did this.”