Xi Jinping: Is He What He Eats? 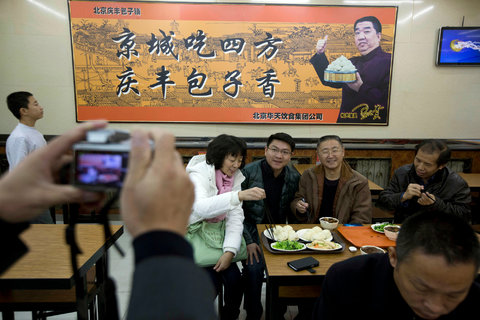 According to one theory, the name of the steamed bun shop, “Qingfeng,” which means “celebrating the harvest” but sounds like the Chinese words for “clear wind” and evokes an honest government official who never takes bribes, suggests the qualities Mr. Xi wants all government officials to uphold as a standard.

Another says the stir-fried pig liver means that any government officials who demonstrate pig-like greed will be “fried,” which can mean to be fired in Chinese.

The green vegetables Mr. Xi ordered, called “jiecai,” sound like the Chinese phrase “beware of wealth” — a possible warning to all officials to resist the temptation of financial gain.[Source]

Meanwhile, Xi’s surprise appearance has boosted business for the restaurant where steamed buns are now selling like “hotcakes.” From Reuters:

President Xi Jinping shocked patrons and restaurant staff when he visited the restaurant on Saturday, paid for his food, carried his own tray and happily chatted with customers.

While common in Western countries, such impromptu interactions are unusual for senior Chinese officials, who have a reputation for carefully stage-managing appearances through the Communist Party’s propaganda arm.

At lunchtime the day after Xi’s visit, more than 400 people waited for a taste of the “Uncle Xi combo” as customers took to calling the pork and onion buns, fried liver and stir-fried greens, the Beijing Morning Post said in a report widely carried in state media.[Source]

Rachel Lu at Tea Leaf Nation adds that Xi’s visit to the Bun Shop “represents a striking contrast to the usual way the Communist Party presents itself to the Chinese people”:

But on his recent lunch outing, Xi went even further. He didn’t bring reporters from any state-controlled media — in fact, he appeared accompanied by just two men, whose identities could not be readily ascertained. One shaky video clip shows Xi slurping soup, paying no heed to awestruck diners who sidle up to have their photos taken with him. In another, Xi obligingly poses for photos as a crowd besieges him with smartphone cameras. The move may have been a stroke of PR genius: Newly armed with grainy (and refreshingly unmodified) photos of their president eating steamed buns, Xi’s online supporters can finally hold their ground when faced with photos of former U.S. Ambassador to China Gary Locke buying his own coffee, or U.S. President Barack Obama chomping down on a burger. Those images have long been popular on the Chinese Internet as an example of how leaders behave in a free and open society.[Source]

The Atlantic’s Matt Schiavenza further explains that in appearing at a restaurant that sells affordable comfort food, Xi made a deliberate statement to remain consistent with his anti-corruption campaign :

Xi’s choice of a simple “comfort food” restaurant is no coincidence. Since assuming office, the president has ordered Communist Party officials to curtail lavish banquet meals, which served as a convenient foil for public anger over corruption.  Last December, Xi even went so far as to specify what he considered an appropriate amount of food for an official meal: four dishes and a soup.

Whether the president’s anti-corruption drive will succeed is unclear, but Xi has certainly shown a knack for public relations that eluded his predecessor, the wooden Hu Jintao. And his pious frugality, at least, has rubbed off on the Qingfeng restaurant itself: When The South China Morning Post asked whether the “Xi Jinping lunch” would become a regular menu item, a staffer named Wang demurred:

“We don’t want to use his visit as a stunt to make money,” she said.[Source]